It only takes “one”…

Just one rock… one Molotov cocktail… one tear gas canister… just one anonymous person in the crowd to set a spark to the powder keg of rage that leads to violence.

We saw it when the Ferguson, MO protests turned to riots when demonstrations over an officer shooting a thug who attacked him… the 2015 Baltimore protests that turned into riots after another death of a criminal in custody… and over the weekend in Milwaukee, WI, protesters turned violent, setting a gas station on fire and attacking other properties, vehicles, police, and shooting at firefighters who tried to extinguish the blazing infernos.

And now the upcoming presidential election outcome has cities, towns, and police departments all across the country planning for the worst!

Are YOU Prepared For Civil Unrest In Your Area? 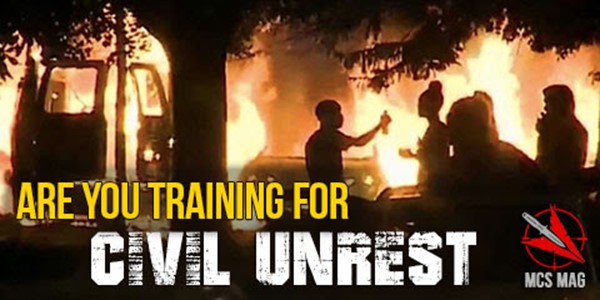 Anyone can see that more and more protests and riots are happening all over the country.

And Los Angeles Police spokesman Cmdr. Andrew Smith warned us about their spread…

“We saw what happened when there were protests over there and how oftentimes protests spill from one part of the country to another.”

In other words, civil unrest can hit anyone… anywhere… any time!

Just like with the Rodney King riots in L.A., these latest standoffs have the smell of a race war, even though the travesty of martial law and civil unrest knows no color.

… buildings burned to the ground out of rage

… and innocent citizens pulled from their vehicles and beaten in the streets!

Will your town suffer a similar fate?

Last year, I elevated my skills with Kevin Reeve’s “Urban Escape & Evasion” class that cost me almost $800 to attend.

Yeah, that’s how serious I am about being prepared for surviving social chaos.

I consider it money well spent to put my skills to the test when it’s just me and and my family trying to escape a civil breakdown, wouldn’t you agree?

Now, I’m not saying you have to shell out 800 smackers for training… but this type of escape and evasion crisis requires a very special set of skills that few people even know of, like…

Most people don’t know any of these urban escape & evasion skills… and yet they could be the one thing that saves your family’s lives when civil unrest rears its ugly head.

The time to prepare is now.

Because you and I both know…