The summer of chaos, largely egged on by the mainstream media and the Obama administrations never ending focus on so-called racial injustices, brought rioting and vicious violence to the streets of Cincinnati over the Holiday weekend. 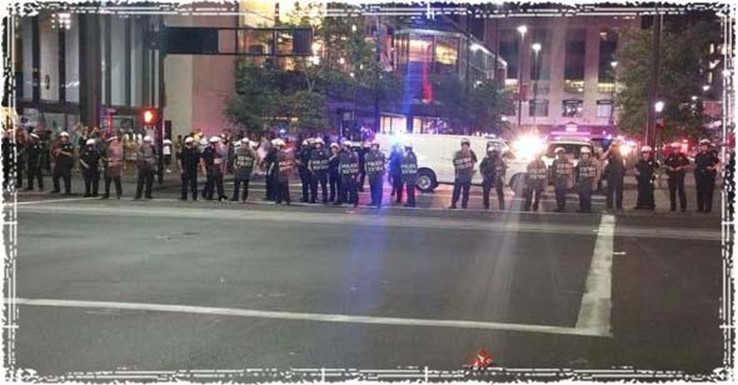 Several officers were severely wounded after trying to rescue a man who was viciously attacked and beaten by a mob.

The man was beaten unconscious following a Hip Hop Fourth of July concert, which exploded into violence and chaos. In the video below, which I warn you is quite disgusting and disturbing, the man can be seen being surrounded by a crowd who is laughing and celebrating his condition.

Simply disgusting to see so many vicious people celebrating that poor man’s beating.

This should serve as warning, and a lesson to those that think this can’t happen. The sad reality of the world we live in is this type of violence is increasing. These types of mob attacks are becoming commonplace, largely because the mainstream media and ignorant politicians continue to excuse this type of behavior, just like they did after Ferguson and Baltimore.

When you have the President of the United Stated making excuses for people who burn down their own neighborhoods, what do you think that does for the criminals of the world? It gives them an excuse and it emboldens them to commit more crimes.

Another news cast where the police reversed their description of the attack.

These are not isolated Incidents; this type of violence is happening throughout the country, but is being ignored by the mainstream media.

Be aware that large events attract chaos: The first mistake this guy made was being anywhere near this type of event. The moment you hear Hip Hop Concert, is the moment you should expect some type of trouble. This has nothing to do with race; it has to do with reality.

But keep in mind that even innocent sounding events can attract trouble. High profile sporting events, political rallies, and even large parades and celebrations can be a major cause for concern. If you do attend one of these large events, make sure you take the proper safety precautions.

Train regularly and with repetition: Being proficient in anything requires repeatedly training yourself to be able to use your skills in a high-stress, high-pressure situation.

Develop your Situational Awareness: Stay off your phone, remove the headphones, and pay attention. The number one thing you can do to protect yourself from criminal threats is to be aware of your environment and what’s going on around you. Here are some other tips for dealing with and spotting mob violence.

Train in a Real-world setting: During your training exercises, you want to put yourself in situations where you feel a bit uncomfortable. When looking for a self-defense school, make sure the school teaches you using real-world situations. For instance, a firearms school needs to go beyond just shooting at paper targets, and should add some sort of stressor to the training.

You need to go beyond firearms training and learn how to defend yourself during a close-quarter attack: Carrying a firearm does not guarantee your safety, and carrying a firearm without training is a recipe for disaster. Unfortunately, many gun owners have never bothered to take a single self-defense course; these same gun owners insist they’ll be able to stop an attack because they’re “armed”.

While carrying a firearm definitely levels the playing field during certain circumstances, the reality of self-defense is that there are certain situations where you’re firearm is not going to be able to prevent an attack, especially if you haven’t trained in real-world self-defense tactics and close quarter combat.