NASA Signals Crisis: “California Has About One Year of Water Left 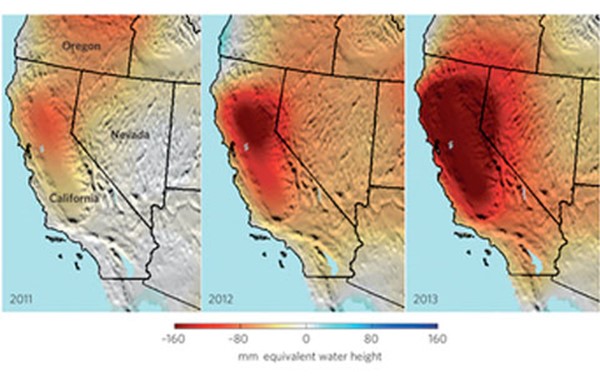 The California drought has already been alarming enough not only for residents of the state – whose water supply was never secured, and has constantly been the source of heated controversy – but those across the country and globe who depend up on its agriculture for survival.

As SHTF reported back in November, NASA scientists have already warned that California’s groundwater supplies are at critical low points, and threatening the food supply:

A new Nature Climate Change piece, “The global groundwater crisis,” by James Famiglietti, a leading hydrologist at the NASA Jet Propulsion Laboratory, warns that “most of the major aquifers in the world’s arid and semi-arid zones, that is, in the dry parts of the world that rely most heavily on groundwater, are experiencing rapid rates of groundwater depletion.”

The most worrisome fact: “nearly all of these underlie the word’s great agricultural regions and are primarily responsible for their high productivity.”

Now, Jay Famiglietti – the same NASA hydrologist who led the previous report – is sounding an all-out alarm that California has less than one year of water remaining based on satellite image data:

Data from NASA satellites show that the total amount of water stored in the Sacramento and San Joaquin river basins — that is, all of the snow, river and reservoir water, water in soils and groundwater combined — was 34 million acre-feet below normal in 2014. That loss is nearly 1.5 times the capacity of Lake Mead, America’s largest reservoir.

Statewide, we’ve been dropping more than 12 million acre-feet of total water yearly since 2011. Roughly two-thirds of these losses are attributable to groundwater pumping for agricultural irrigation in the Central Valley. Farmers have little choice but to pump more groundwater during droughts, especially when their surface water allocations have been slashed 80% to 100%. But these pumping rates are excessive and unsustainable.

As difficult as it may be to face, the simple fact is that California is running out of water — and the problem started before our current drought. NASA data reveal that total water storage in California has been in steady decline since at least 2002, when satellite-based monitoring began, although groundwater depletion has been going on since the early 20th century.

Right now the state has only about one year of water supply left in its reservoirs, and our strategic backup supply, groundwater, is rapidly disappearing. California has no contingency plan for a persistent drought like this one (let alone a 20-plus-year mega-drought), except, apparently, staying in emergency mode and praying for rain.

Famiglietti makes no hesitation in calling for mandatory water rationing and other measures to cut water uses:

First, immediate mandatory water rationing should be authorized across all of the state’s water sectors, from domestic and municipal through agricultural and industrial. The Metropolitan Water District of Southern California is already considering water rationing by the summer unless conditions improve. There is no need for the rest of the state to hesitate.

And he further claims that public support, at over 94% in polls, is sufficient to support massive state intervention in residential water usage, and even back mandatory restrictions.

If the claims of California’s water shortage are not overstated for effect, it may be tough times coming for the Golden State.