KIM Jong-un needs only one hydrogen bomb to bring America to its knees. And he knows it. This is the nation-wide effect it can have in nanoseconds.

DETONATING a thermonuclear warhead 400km above Washington would instantly fry most of the nation’s power grid — and electronics.

The idea is not about melting a city, set enormous fires and irradiate vast tracks of terrain.

It’s about eliminating a nation’s entire infrastructure in a single flash.

This is where the gamma radiation of a high-altitude nuclear blast interacts with the ionosphere — a blanket of electrons and electrically charged particles surrounding the Earth — to send a series electromagnetic pulses spearing into the ground below.

Once this burst of radiation strikes the ground it can induce strong currents — particularly in electrical cables and phone lines. This can overload and destroy electrical networks, as well as cause delicate circuit boards to fuse.

An entire economy can be brought to a standstill in nanoseconds.

In the words of former director of the CIA James Woolsey, it would bring the United States “to a cold, dark halt”.

The 1962 “Starfish Prime” high-altitude thermonuclear test which revealed the effects of EMP. This picture was taken 45 to 90 seconds after the detonation. Picture: Los Alamos National LaboratorySource:Supplied

It’s an effect similar to that of Earth being struck by a serious solar storm, or — at a much smaller scale — when lightning causes a surge in a power grid.

North Korea’s state news agency commented on just such a tactic at the weekend. It follows a series of similar observations about the power of EMP in July.

The latest statement boasts North Korea’s new bomb “is a multifunctional thermonuclear nuke with great destructive power which can be detonated even at high altitudes for super-powerful EMP attack.”

US National Guard soldiers after Hurricane Katrina in 2005. The fallout from an EMP attack would span much of America. Picture: AFPSource:AFP

It’s a use clearly on Kim Jong-un’s mind.

But it’s not an attack without human cost.

It would bring “widespread and long lasting disruption and damage to the critical infrastructures that underpin the fabric of US society,” a 2008 US Congress report warns.

The last time anything on this scale happened was in 1859 — when the world was just beginning to discover the use of electrical technologies. The EMP from an enormous solar storm overloaded the simple telegraph wires then in use to transmit morse code, setting the paper telegrams at their terminals on fire.

Things would be infinitely worse today.

“Two thirds of the US population would likely perish from starvation, disease, and societal breakdown,” Woolsey warned US Congress in 2014. “Other experts estimate the likely loss to be closer to 90 per cent.”

A Louisiana Army National Guard officer pleads for evacuees to stop from pushing forward during relief efforts at the Superdome in New Orleans, after the 2005 Hurricane Katrina disaster. The impact of an EMP attack would be far worse. Picture: APSource:News Limited 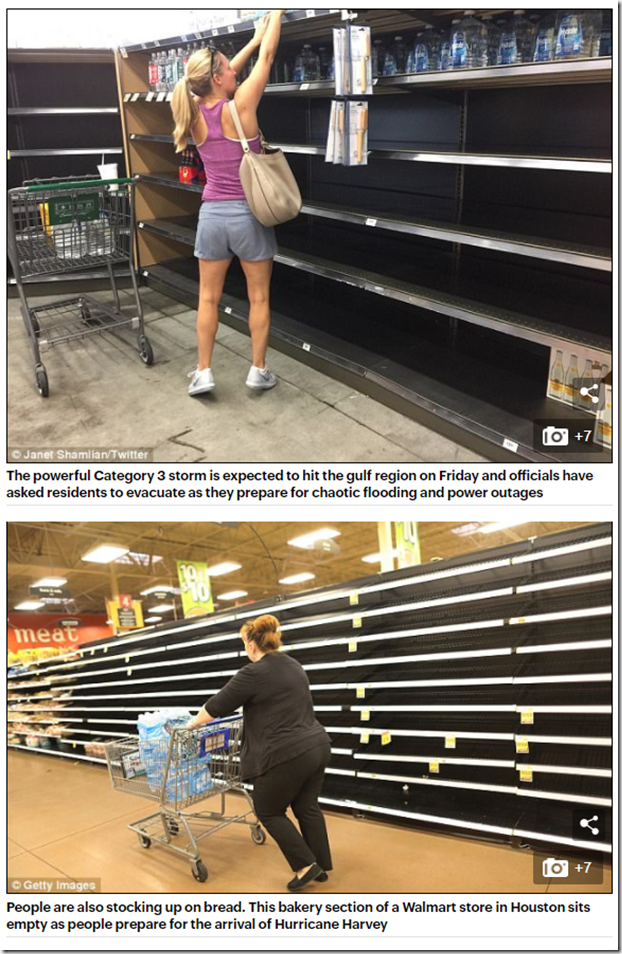 Hospitals would be without power. Essential services — electricity, gas, water, sewage, communications — would all be offline. Emergency services would be unable to respond. Food production and distribution networks would collapse.

Computers. Smart phones. Car ignitions. Pacemakers. Any form of delicate electronics within the pulse’s effective range would cease to function.

But the greatest damage would be to the power grid itself. Power stations and network transformers would be burnt out.

And the effect of a high-altitude EMP burst would not be localised.

The night sky above Honolulu is lit with an eerie glow after the Starfish Prime high-altitude thermonuclear test.Source:Supplied

A 1.4 megaton US hydrogen bomb detonated 500km above the Pacific in 1962 caused lights to flare-out in Honolulu, more than 2000km away. It also knocked-out eight satellites.

A weapon of the magnitude tested by North Korea at the weekend could — if well positioned — burn out the power grid of a large part of the mainland United States.

Repairing the damage would take years.

And delivering such an attack would actually be much easier for Kim Jong-un’s hermit state.

Kim Jong-un inspected the loading of a hydrogen bomb into a new intercontinental ballistic missile fairing, a claim to technological mastery that some experts doubt. Picture: APSource:AP

Such a high-altitude thermonuclear attack does not require the technical skills necessary to enable a warhead to survive re-entry to the Earth’s atmosphere, cope with the heat of enormous speeds — and still hit its specific target.

Perhaps this is why the devastating power of EMP attack has again appeared in North Korean propaganda broadcasts.

“I can exploit it in high-altitude areas for strategic purposes and (inflict) EMP attacks on vast areas,” Kim Jong-un declared back in July.

In 2015, North Korean propaganda boasted it could destroy all electronic devices in South Korea and Japan by detonating a 100 kiloton bomb 100km above Seoul. “If we lower the altitude to 60-70km, we can make the EMP effect only the southern part of the Korean Peninsula,” it declared.

“(EMP) can neutralize all advanced electronic guided weapons and destroy aircraft carrier fleet at once”.

The warhead it tested yesterday is estimated to be in the vicinity of 50 to 120 kilotons.

But such an attack would not give Kim Jong-un a victory.

The nuclear arsenals of the United States are hardened against such a pulse. It’s also one of the reasons so much effort and money is invested on near-invisible and widely dispersed ballistic missile submarines.

The instant a North Korean ICBM was detected to be on a trajectory capable of delivering such a high-altitude blow, a retaliatory firestorm of nuclear warheads would almost certainly be unleashed on North Korea itself.

Such is the grim nature of Mutually Assured Destruction — the Cold War philosophy that compelled cool minds to avert the catastrophe that could have resulted from the likes of the 1960s Cuban missile crisis.