After watching the movie “Catching Fire,” you are probably thinking about how you can possibly survive the Hunger Games. If you  are Batman, you don’t really have that much to worry about. But let’s face it; you are not.

Human actions and technological advances are swiftly shifting, causing some experts to say that the earth’s capacity to support future  needs is declining. So, if the nation suddenly lost its marbles and those who have power decided that it would be pretty cool to host an annual Hunger Games  to control the world’s limited resources; you better start saying  your prayers once the first reaping starts.

Well, that would be the case until you came across this article. After watching the first two films of the “Hunger Games” trilogy, it is imperative for you to have concrete plan for surviving in one—you know, just in case it actually gets true because of the perceived unsustainability in the near future.

There will be no lessons for fancy back flipping karate chops to be found in this article, because that’s exactly how you will get yourself killed. Without further ado, here are the most real and sane tips on how to become the winner of the Hunger Games (just in case you  get to join in one). 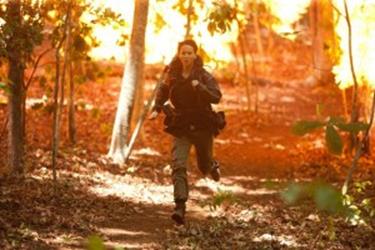 It’s a jungle out there… literally

Haymitch is right; your actual enemy in the hunger games is the terrain itself. The same is even truer in real life. There are countless people who foolishly venture in the forest without knowing the dangers that wildlife presented. It will greatly help you in your quest to survive if you start acquainting yourself with the poisonous plants and dangerous animals that lurks in the jungle. Such knowledge will improve your chances of survival in the bloodbath. Knowledge in terrain allows you to use plants as solution to hunger. Remember: not all berries and mushrooms are safe; or else you may end up like Foxface.

Avoid combat… at all costs

Yes. I may be a party pooper for saying this, but under any circumstances, avoid getting into any combat because that’s what dense people do.  As soon as the game begin, just take what you can at the Cornucopia,  get survival gears and everything you will be needing for the rest of  the game. You can also go straight to the forest and escape the bloodbath altogether. When locked in a combat, you are only risking yourself into unnecessary injuries, which will make surviving even harder. At the first few stages of the game, let them kill off one another and stay hidden in the sidelines. Even career fighters will get tired and will leave themselves open for attack. Once they have dropped their guard, that’s when you go for the kill. Remember, when the mussel and the snipe struggle, the fisherman benefits.

You already have intimate knowledge of the terrain and have managed to stay out of everyone’s way. Your enemies must be tired after all the fighting they did earlier. This is a great opportunity for you to take the counter-offensive, and crush your enemies’ morale. In Sun Tzu’s “Art of War,” morale stands for the condition of the soldiers to fight. Without it, they are as good as dead. The same can be said in the Hunger Games, you only need to break their will to fight and once battered, they can be easily eliminated off. You do this by staying hidden, as it allows you to dictate whether you wanted to fight or not. The next thing will put your brain to use.

You sneak up on them, strategize and attack their supplies. As told before, you can either burn them to the ground or poison them to spread dissent, just in case they have allied themselves. A muddle like this will cause a casualty or two from the enemy ranks, and if they took the moral high ground, you can watch them starve together. Another approach is you keep them restless. You can do this by provoking them every night by making strange noises or starting fires in their camp. This will keep them on their knees 24/7 and if you are good enough, they will become paranoid and start leaving themselves in the open.

Well, all in all, what you need to survive the possible future Hunger Games is skill, knowledge and slyness. With the right knowledge of your surroundings and a decent knowledge in psychology, you are certain to outsmart your enemies to victory. So start practicing now, and may the odds be ever in your favor.