In the second suspected terror attack this week in Canada, a radicalized Islamist convert, Michael Zehaf-Bibeau, shot and killed a Canadian soldier and then stormed the Canadian Parliament. Police are reporting 3 separate shootings – one in Parliament, one at the Canadian war memorial, and one at Rideau Centre mall. Canadian authorities are looking for as many as three gunmen, and the entire area has been shut down all day.

Witnesses said the soldier was shot at point-blank range by Zehaf-Bibeau, who was dressed all in black, with a scarf over his face. The gunman then ran off and entered Parliament, a few hundred yards away, where 30 – 50 shots soon rang out. Ottawa police spokesman Chuck Benoit said two or three gunmen were believed to be involved in the attacks. Gilles Michaud, assistant commissioner of the Royal Canadian Mounted Police, called it a “dynamic, unfolding situation.”

The shooting comes two days after another Islamic radical killed one Canadian soldier and injured another in a hit-and-run style attack before being shot by police. That suspect had been on the radar of the Canadian government, who feared he had jihadist ambitions and seized his passport when he tried to travel to Turkey.

“The indications are there is more than one gunman. There may be several,” Canadian MP Marc Garneau told the BBC, adding he and fellow politicians were evacuated from the area.

Cabinet minister Tony Clement tweeted that at least 30 shots were heard inside the Parliament building, where MPs were holding their weekly caucus meetings. Emergency responders are still on the scene and paramedics took the wounded soldier away in an ambulance. 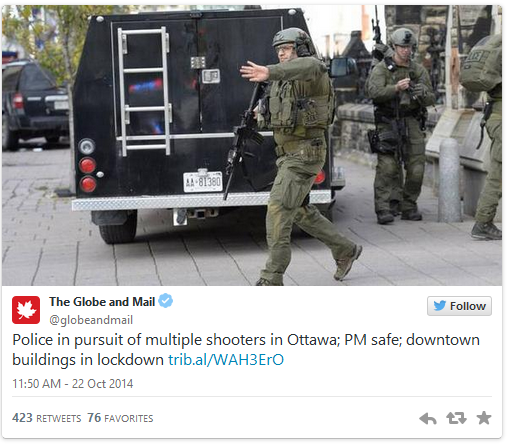 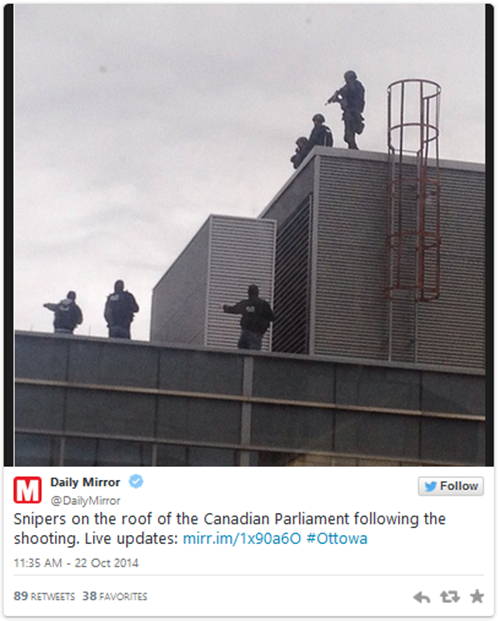 Canadian Military told not to Wear Uniform in Public.