Shoot First or Call 9-1-1: What Would You Do If Someone Kicked In Your Door?

In the wee hours of the morning on September 13th, Air Force Sgt. Matt Pinkerton and his wife were entertaining guests at their home when an acquaintance of Mrs. Pinkerton’s came knocking.

It was 2 AM. After being told to leave by Matt Pinkerton, who closed the door, Kendall Green decided that he’d kick it in and force his way into the home.

Matt Pinkerton, having armed himself with his Glock17 9mm prior to approaching the door, then proceeded to discharge two rounds into Green.

Green was subsequently killed in an obvious act of self defense.

But the story didn’t end there, as it should have.

You may be asking yourself under what pretext?

According to the DA, Pinkerton exhibited “bizarre behavior” by grabbing his weapon when an unexpected knock came to his door at 2AM that morning. And, because he failed to call 9-1-1 between the time Green kicked in his door and rushed him, he has now been charged with murder by the state.

Mike Pinkerton, one of the guests and brother of Matt, recalls the incident via Bullets First:

“He (Green) kept coming forward so Matt fired. He rocked backwards and took another step forward at which time Matt took his second shot. He stumbled backwards and fell out the door onto the porch.”

“When the shots were fired Jessica called 911.  Matt spoke to the operator; he removed the clip from his gun and the bullet in the chamber. Police arrived within five minutes.”

So what did Matt do wrong when a crazed man broke in his front door at 2am and was after his wife?  To me, nothing.

Yet according to the state of Maryland, Matt should have called 911 first and waited for the police.

That isn’t some glib, pro gun caricature of the how when seconds count cops are minutes away.  This is the reason he is being charged with murder.  It doesn’t help that on top of the lack of a Castle Doctrine Statute the  Assistant State’s Attorney, Glen Neubauer, is an rabid anti gunner himself.

Besides maintaining the ridiculous notion that calling 911 while a crazed intruder just smashed his way into your house is the only legal option, Neubauer also claims that  even the act of grabbing the gun in the first place is “bizarre behavior in itself.”

As an important note, Mrs. Pinkerton was in no way involved with Kendall Green and a long list of evidence suggests they were merely friends, until Green decided he wanted more out of the relationship, at which point Mrs. Pinkerton ended their interactions.

Thus, it should be obvious that Kendall Green was likely demonstrating irrational emotional and mental behavior the morning he kicked down her door and entered her home.

The Pinkertons have set up a Facebook page in an effort to bring awareness to Matt’s plight against an overzealous District Attorney, who himself is a staunch supporter of anti-gun laws.

Through no fault of his own, Matt Pinkerton is now facing the real possibility of being imprisoned for doing what any self respecting, individually responsible person would do – defending himself, his wife, his guests and his home.

His legal expenses have already exceeded $25,000, plus an additional $25,000 so that Sgt. Pinkerton could be released on bond while awaiting his trial. The family was forced to take out loans in order to make these payments.

So, not only is the State now threatening the freedom of a man who defended those he loved, they are impoverishing him and his family for no other reason than to make a political statement.

The Pinkertons have received an overwhelming show of support since making their story public, with thousands flocking to their Facebook page. Matt Pinkerton was compelled to respond to his many supporters directly:

The monetary support is simply amazing! While I appreciate it, I don’t want anyone to overextend themselves. I am still working, and still getting paid. I received word that the GiveForward effort was reported. They shut it down when they learned it was not medically related. That said, they are cutting a check, IN THE AMOUNT OF $12,453!!!, give or take 20 bucks or so. Words can’t express my appreciation. I was standing guard at the gate when my wife texted me that our friend, Erica, set up the donation page. It’s a blessing to have so many supporters! From what I have been told, the reps at GiveForward suggested to Erica another site. I have since learned she has set something else up…or so I believe she has given the mass amount of emails I am receiving about PayPal donations/

I hate accepting money from anyone! I wouldn’t even allow my parents to purchase my first vehicle at the age of 16. However, I understand there are some that still want to help.

I have a LOT I would like to say. However, as you all likely know and understand, my lawyer would suggest I not. When this is all said and done, regardless of the outcome, I will share my story.

It is a travesty that Sergeant Matt Pinkerton has been put into this position.

The majority of people with any common sense at all know the answer to the question: What Would You Do If Someone Kicked Your Door In?

Matt had to make an immediate determination about how to respond to an intruder who had just kicked in his door, had made the decision to target him directly, and was making his way towards him.

He had mere seconds to decide, because 10 – 15 feet is not much ground to cover when someone is racing towards you with violence on their mind.

The last thing on Matt’s mind was whether he should call 9-1-1 at the particular moment in time.

We often say it’s better to be judged by twelve than carried by six.

This is a real life representation of the adage.

If you’d like to lend your support to Matt Pinkerton and his family, their friends have set up a crowd funding page to help with his defense.

Visit the page and leave a comment or donation if you have the means available to do so. 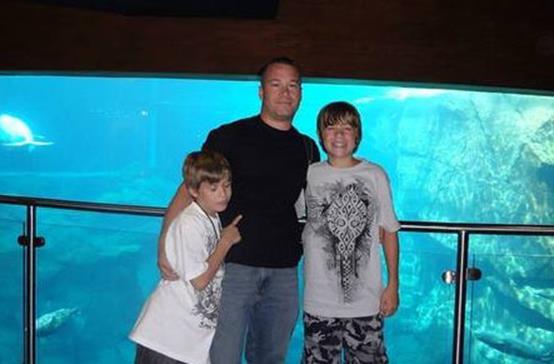 (Pictured: Matt Pinkerton with his sons)