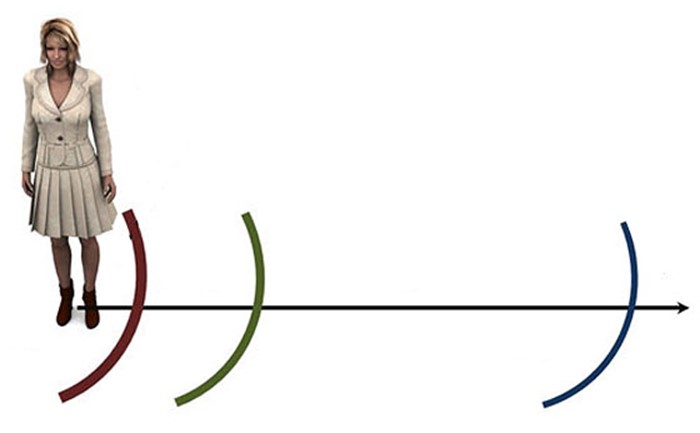 All of you have a natural sense of the space (distance) that you keep between yourselves called your personal space. Your invisible circles. Your ‘safe’ perimeter. Your personal boundaries.

Particularly when you are among strangers, your situational awareness is at work (even unknowingly) while you constantly gauge and adjust your distance between yourself and others – while standing, while walking, and even while driving.

Here’s what you need to watch out for…

Next time that you get into an elevator with others, pay attention to what happens. Everyone mostly re-shuffles themselves to be furthest away from each-other or to ‘balance out’ the invisible circles between everyone so they are somewhat evenly distributed. It’s a natural thing. Interesting isn’t it?

Here’s the thing – what if you were the only one in the elevator when another person steps in and proceeds to ‘invade’ your personal space while standing awkwardly close to you? Even though this person is doing nothing wrong, it would ‘feel’ weird and uncomfortable to you, right? Your natural reaction will probably be to move further away to a more comfortable distance – whatever that is for you.

This is true anywhere. Whether you’re walking along or simply standing somewhere. If someone gets ‘too close’ and comes into your invisible circle, it suddenly gets uncomfortable.

When this happens (someone invading your personal space), there are a few additional things you might consider getting into the habit of doing.

1. Observe if that person is projecting aggressive body language. Does the person seem ‘normal’?

2. Is the person talking (to you, someone else, or them-self) in any verbally aggressive tone?

3. Look at the person’s hands. Is there a weapon (hidden or otherwise)?

‘Sizing up’ the person can be accomplished nearly instantly. Quick observation while listening to your own ‘Spidey-senses’ may provide enough warning regarding a potential issue or threat – enabling you to take preemptive action, be it moving further away or preparing for an incident.

The simple point here regarding situational awareness during an invasion of your personal space (your invisible circles) is to go a step beyond simply ‘noticing’ and shifting your position. Additionally, train yourself to also observe the ‘invader’ and size up the situation as being a false alarm (probably 99.9% of the time) or a possible threat (all it takes is once)…

Mrs. and I were at our local Rite Aid store while picking up a few supplies. While standing at the end of an aisle looking at a particular product, a man brushed past me while at the same time loudly announcing ‘EXCUSE ME!’. As he walked past (within an inch) he had plenty of room to have otherwise shifted his walk while leaving plenty of ‘space’ between us. Instead he chose to invade my invisible circle. As he walked past and while I looked at him, he maintained eye contact for several strides as he walked toward the register. My ‘Spidey-senses’ instantly told me that this man was aggressive (maybe having a bad day or maybe just the type who’s always looking for a fight). My immediate reflexive reaction was to impulsively return “You’re excused” as I maintained eye contact till he looked away – which in retrospect I probably should’ve just kept my mouth shut (it’s not worth it). As we checked out a few minutes later, and although he had already left the store, before I exited I had Mrs. Hold the bags in case this nut job was waiting outside. He was not. But the point is, I was acutely aware that there could’ve been an incident and I was ready for it. It all started when this guy purposely invaded my personal space in an aggressive way. I could’ve remained ignorant about it (not anticipating a potential ambush) but instead my gut told me that this guy was ‘over-the-top’ and might present a problem. Just ‘be aware’…