For many years U.S. Intelligence agencies believed that North Korea’s nuclear weapons program was a failure due to the low explosive yield of their tests. According to EMPact America’s President and former CIA nuclear weapons analyst Dr. Peter Vincent Pry, this is not the case:

North Korea’s last round of tests, conducted in May 2009, appear to have included a “super-EMP” weapon, capable of emitting enough gamma rays to disable the electric power grid across most of the lower 48 states, says Dr. Peter Vincent Pry, a former CIA nuclear weapons analyst and president of EMPact America, a citizens lobbying group.

North Korea’s nuclear tests have been dismissed as failures by some analysts because of their low explosive yield. But Dr. Pry believes they bore the “signature” of the Russian-designed “super-EMP” weapon, capable of emitting more gamma radiation than a 25-megaton nuclear weapon.

Pry believes the U.S. intelligence community was expecting North Korea to test a first generation implosion device with an explosive yield of 10 to 20 kilotons, similar to the bomb the U.S. exploded over Nagasaki in 1945. He said, “So when they saw one that put off just three kilotons, they said it failed. That is so implausible.”

Since EMP is a line-of-sight weapon, detonating one of these nukes about 300 miles above Nebraska could end life as we know it in America in about one second. 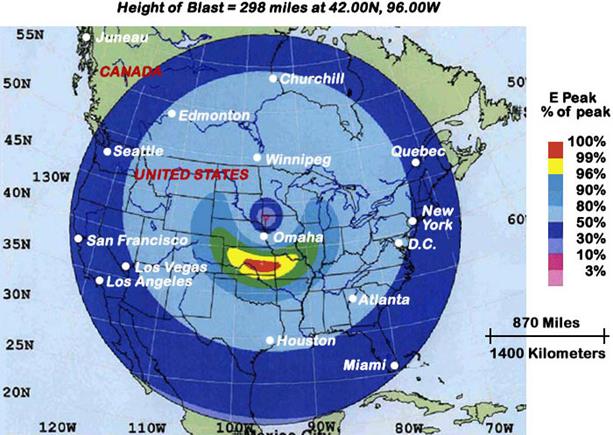 While North Korea may be the latest country to test such a weapon, it is clear that the technology has been available for nearly 50 years, and it has since been leaked to rogue nations, and perhaps rogue terror and shadow elements with the financing, capability and wherewithal to use it:

Such a weapon — equal to a massive solar flare such as the “solar maxima” predicted by NASA to occur in 2012 — poses “substantial risk to equipment and operation of the nation’s power grid and under extreme conditions could result in major long term electrical outages,” said Joseph McClelland of the Federal Energy Regulatory Commission in Senate testimony last month.

Pry said that a group of Russian nuclear weapons scientists approached him in 2004 when he served as staff director of the Commission to Assess the Threat to the United States from Electromagnetic Pulse (EMP) Attack, to warn the United States that the technology to make that weapon “had leaked” to North Korea, and possibly to Iran.

When we talk about potential terrorist action against the United States, we discuss this in the sphere of any organization, be it Al Queda, state sponsored, or shadow government related. These weapons exist, and they are, without a doubt, the single biggest threat to the United States of America.

As we’ve previously reported, such a weapon, or group of weapons strategically detonated at lower altitudes, would completely wipe out the entire US power grid, vehicles, computers, cell phones, and anything else with an electric circuit.

The fall out would be nothing short of apocalyptic.

In July of 2010 EMPact America published an overview of the EMP 2010 Conference in which they discussed the threat EMP posed to the nation and the fact that very few people understand how great and imminent it is:

…An electromagnetic pulse, or EMP, is a super energetic radio wave that’s immediately harmless to people, but it’ll burn out all the critical electronic systems that sustain human economic activity and human life across vast areas, including the entire continental United States.

The Center for Security Policy, in a report issued last year, has estimated that in the event of a wide-scale EMP attack on the United States, as many as nine out of ten Americans would be dead within one year:

“Within a year of that attack, nine out of 10 Americans would be dead, because we can’t support a population of the present size in urban centers and the like without electricity,” said Frank Gaffney, president of the Center for Security Policy. “And that is exactly what I believe the Iranians are working towards.”

What does matter is that very few Americans are prepared for such an outlier.

The first 24 – 48 hours after such an occurrence will lead to confusion among the general population as traditional news acquisition sources like television, radio and cell phone networks will be non-functional.

Within a matter of days, once people realize the power might not be coming back on and grocery store shelves start emptying, the entire system will begin to delve into chaos.

Within 30 days a mass die off will have begun as food supplies dwindle, looters and gangs turn to violent extremes, medicine can’t be restocked and water pump stations fail.

For those interested in learning more about the after-effects of EMP and several different scenarios in which you may find yourself, we strongly recommend reading / watching the following:

With the information gained you’ll theoretically have a working knowledge of the supplies you’ll need for extended grid-down situations. Additionally, each story deals with a slightly different setting, so you’ll have an understanding of the organizational and defense requirements necessary to secure and manage an individual property, small community neighborhood, and an entire town.

Power outages happen all the time. But you’ll know an EMP has been detonated (or we’ve been hit by a massive solar event) if the power to your house goes off, cars are not starting, and your cell phone won’t turn on. If that happens, take a deep breath, say a prayer, and put the supplies and knowledge you’ve acquired to work, because it won’t be long before the golden horde wrecks havoc.