The Formula For Penicillin

From our friends at doomandbloom.net

As you might know, I write mostly about how to deal with medical issues in situations where modern medical facilities and care don’t exist. Accumulating medications for disaster settings may be simple when it comes to finding aspirin and other non-prescription drugs, but prescription drugs will be hard to get for those who can’t write their own prescriptions or don’t have a relationship with an understanding physician.  Antibiotics are a case in point.

I consider this a major issue because there will be a much larger incidence of infections when people have to fend for themselves. In a long-term survival setting, they will perform activities to which they are not accustomed and injuries are likely.  Simple cuts and scratches from, say, chopping wood can begin to show infection, in the form of redness, heat, and swelling, within a relatively short time.

The History Channel, some years ago, aired a special called “After Armageddon“, where a family gets out of Dodge after a collapse-level catastrophe and eventually makes their way to a village of survivors. Integrating into the community, the father (a paramedic) takes to gardening and other survival-type activities. He suffers a cut which quickly becomes infected. Unfortunately, no antibiotics are available and he slowly succumbs to the infection despite knowing exactly what’s happening to him.

Treatment of infections at an early stage improves the chance that they will heal quickly and completely.  However, many rugged individualists would most likely ignore the problem until it gets worse. This is unwise, as an infection can become life threatening if not treated. Having antibiotics readily available would allow them to deal with the issue until medical help (if available at all) arrives.

Years ago, I wrote the first physician article about aquarium and avian antibiotics as a way to stockpile medications for the uncertain future.  Since the only ingredient in certain of these medications is the antibiotic itself, it’s a reasonable alternative. There are some veterinary antibiotics, like Fish-Mox, that are only produced in human dosages and appear identical to human pharmaceuticals, down to the identification numbers on the capsules. For more information, see my series of articles on the subject.

This is not to say you should treat yourself in normal times. When modern medical care is available, seek it out. The practice of medicine without a license is illegal and punishable by law.

Once in a while, I get someone who wants to know how to make penicillin (isn’t it just bread mold?).  It’s true that penicillin is a by-product of a fungus known as penicillium, which, indeed, grows on bread and fruit.  It was originally discovered by Alexander Fleming in 1929. In 1942, a moldy cantaloupe in Peoria, Illinois was found to have a strong version of it.  Most of the world’s supply of penicillin in the 1940s came from cultures of the fungus on that cantaloupe.

There is a formula for making penicillin at home. It’s next to impossible, honestly, to get all the chemicals needed to produce it safely. Besides the legal issues, home laboratories are dicey at best (just ask a local Meth dealer). To illustrate a point, however, here it is:

THE FORMULA FOR PENICILLIN 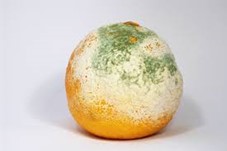 First you need to produce a “culture” of the penicillium fungus. – Amicrobiological culture is a method of multiplying microscopic organisms by letting them reproduce in a certain environment under controlled conditions.

One of the most important things to know is that it is easy for other microbes to contaminate your penicillium culture, so use sterile techniques at all times or you will likely wind up with something entirely different (and, possibly, harmful). 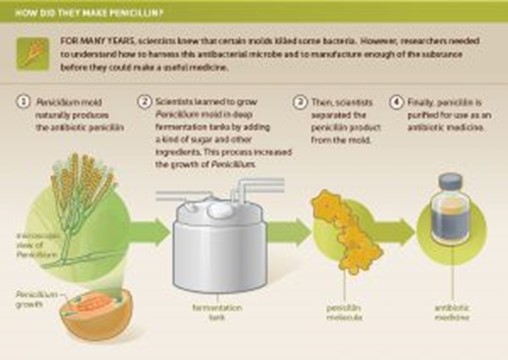 Expose a slice of bread or citrus peel or a cantaloupe rind to the air in a dark place at 70 deg. F until a bluish-green mold develops.

Cut two fresh slices of whole wheat bread into ½ inch cubes and place in a 750ml Erlenmeyer flask with a non-absorbent plug. One thing you might not know is that a lot of bakeries put a substance called a mold inhibitor on bread.  This suppresses fungal growth so you should probably use bread that you baked yourself.

Sterilize the flask and contents in a pressure cooker for at least 15 minutes at 15 psi. An alternate method is to place in an oven at 315 degrees Fahrenheit for one hour.

In a sterile fashion, transfer the fungus from the bread or fruit peel into the flask containing the bread cubes. Allow the cubes to sit in the dark at 70 degrees for 5 days. This is called incubation.  That’s the easy part.

This is where it gets complicated. Prepare one liter of the following solution:

You’ll obviously need a scale that measures very small amounts. These are called gram scales and you can find them online.  The above ingredients can be found at chemical supply houses, but you’ll have to buy a significant amount.

Dissolve the ingredients in the order listed in 500ml of cold tap water and then add more cold water to complete a liter (1000 ml).

Adjust the pH to 5.0-5.5 using HCL (hydrochloric acid). You’ll need a pH test kit like those found at pet shops and garden supply stores. Fill glass containers with a quantity of this solution. Only use enough so that when the container is placed on its side the liquid will not touch the plug.

Sterilize the containers and solution in a pressure cooker or stove just like you did before. When it cools, scrape up about a tablespoon of the fungus from the bread cubes and throw it into the solution.

Allow the containers to incubate on their sides at 70 degrees for seven days. It’s important that they are not moved around.  If you did it correctly, you’ll have Penicillin in the liquid portion of the media. Filter the mixture through a coffee filter or something similar, plug the bottles, and refrigerate immediately.

To extract the penicillin from the solution:

Adjust the cold solution to pH 2.2 using (.01 %) HCL. Mix it with cold ethyl acetate in a “separatory funnel” (that’s a funnel with a stopcock; you can find all these items at chemistry glass suppliers) and shake well for 30 seconds or so.

There you have it, you have put together a laboratory and made Penicillin!  You are now officially a mad scientist.

It’s clear that making penicillin at home is beyond the ability of non-chemists.  However, it does make a point.   If there’s a major long-term disaster, there isn’t a way that anyone will be able to produce reliably safe and effective antibiotics at home. You might read about producing penicillin teas, but the issue is that you might have contamination by other molds that could be hazardous to your health.

If you are concerned about a collapse-level event, it may be wise to consider stockpiling some veterinary equivalents. At present, no prescription is necessary nor is there a limit to quantities purchased. This may eventually change as the CDC has declared that an increased “stewardship” of animal antibiotics will be necessary to combat the issue of antibiotic resistance. This is a reasonable concern, but restrictions will probably involve drugs for food animals first.

You can find lists of useful antibiotics, their veterinary equivalents, and much more in “The Survival Medicine Handbook: The Essential Guide for When Medical Help is Not on the Way“, now in its 700 page Third Edition. The book is available on Amazon or at DoomandBloom.net.

If you don’t want to buy fish medicine, at least grow plants that might have some antibacterial action. Garlic, for example, has scientifically proven antibacterial properties, as do some other herbs.  Honey, in its raw and unprocessed state, is also consider to be antibacterial. More on various herbal options in a future article.