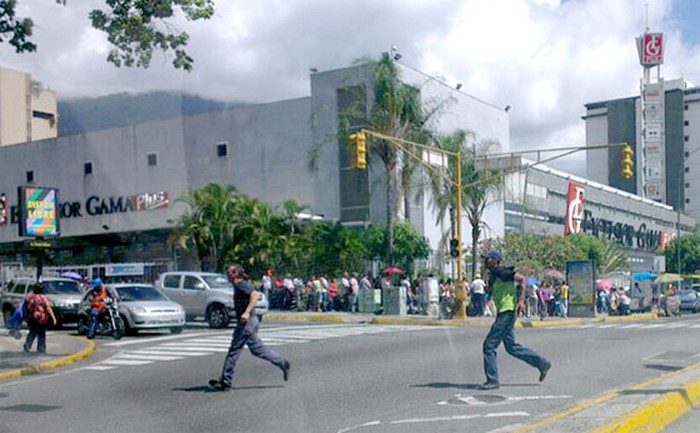 Food shortages there are deepening and Venezuelans have been jolted out of the notion that food will always be readily available in the grocery stores.

Long lines, some stretching for blocks, formed outside grocery stores in the South American country’s capital as residents search for scarce basic items such as detergent and chicken.

One resident said, “At this point I’ll buy whatever I can find.”
-Bloomberg.com

Security forces are being sent to food stores and distribution centers to protect shoppers.

Inside a ‘Plan Suarez’ grocery store yesterday in eastern Caracas, shelves were mostly bare. Customers struggled and fought for items at times, with many trying to skip lines.

The most sought-after products included detergent, with customers waiting in line for two to three hours to buy a maximum of two bags. A security guard asked that photos of empty shelves not be taken.
-Bloomberg.com 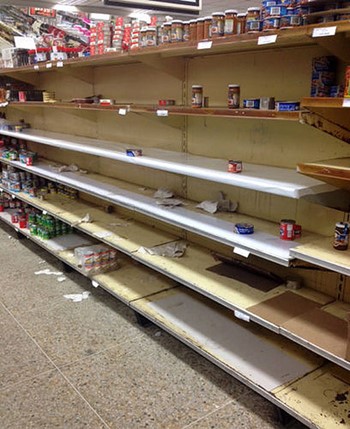 “You can’t find anything, I’ve spent 15 days looking for diapers,” Jean Paul Mate, a meat vendor, said outside the Luvebras store. “You have to take off work to look for products. I go to at least five stores a day.”

“Companies are not sure how they will restock their inventories or find merchandise, with a looming fear of a devaluation.”

“This is the worst it has ever been — I’ve seen lines THOUSANDS of people long,” Greisly Jarpe, a 42-year-old data analyst, said as she waited for dish soap in eastern Caracas. “People are so desperate they’re sleeping in the lines.”

——————————
Should we ever face a currency devaluation event here in the United States (or anywhere), this is what will happen. And it will likely be much worse than this, given the extreme dependence on government today coupled with the fact that hardly anyone apparently has food storage beyond a few days or weeks.

If you don’t think that it can happen here, think again.

The fiscal house of the United States (and elsewhere) is basically a house of cards just waiting for a sufficient breath of wind to knock it over. Don’t let your normalcy bias lull you into a false sense of security.

It’s always a good thing to be prepared. So why not store back some extra food…