Note: In recent weeks the country of Venezuela has implemented everything from price controls to rationing in an effort to control the hyperinflation that has gripped the nation. All attempts at controlling demand and ‘hoarding’ have thus far failed, prompting government officials to issue directives requiring biometric verification for the purchase of foodstuffs. What’s happening in Venezuela is a clear example of how government first causes the problem, often leading to panic, and then points the blame at everyone but themselves. Officials claim that unscrupulous merchants (who have been forced to sell goods at prices lower than they have acquired them) and the hoarding of food by individuals is to blame for the shortages.

The solution, of course, is more government, and in this case that means registration of fingerprints and other personal data in exchange for permission to purchase food. Be assured that the same plans are in place right here in the USA. In fact, we already have an electronic mechanism of exchange in the form of Electronic Benefit Transfer (EBT) cards. Should the worst happen and the US dollar crashes at some point in the future, those who failed to prepare (or, hoard as the government would suggest) are destined to forced registrations at their local post office or other government entity. Daisy Luther of The Organic Prepper explains what’s happening right now in Venezuela, how a similar situation could unfold in the USA, and what you can do to prepare in advance.

For those looking to implement a frugal and highly effective strategy in advance of food shortages or currency crisis we suggest taking a look at Daisy’s book The Pantry Primer: How to Build a One Year Food Supply in Three Months.

Also check out another option from us here: A Year of Supplemental Food Storage for $300 for a family of FOUR ! 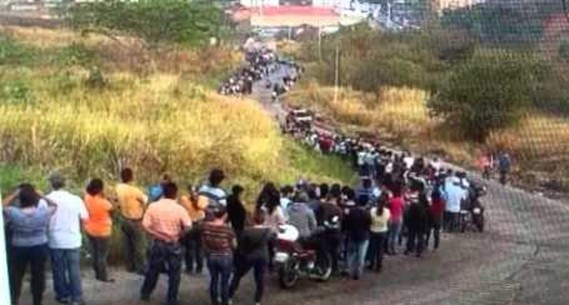 (Pictured: Amateur photo: Venezuelans line up for miles in an effort to acquire food during hyperinflationary food shortages – March 2014)

Venezuela Enforces Fingerprint Registry to Buy Groceries: What to Do Before Rationing Starts in America
By Daisy Luther

What if you were forced to “register” in order to buy groceries?  And what if, through that registration, the food you bought could be tracked and quantities could be limited?

That’s exactly the plan in Venezuela right now.  The AP reports that in an effort to crack down on “hoarding” that ID cards will be issued to families.  These will have to be presented before foodstuffs can be purchased.

Registration began Tuesday at more than 100 government-run supermarkets across the country. Working-class shoppers who sometimes endure hours-long lines at government-run stores to buy groceries at steeply reduced prices are welcoming the plan.

“The rich people have things all hoarded away, and they pull the strings,” said Juan Rodriguez, who waited two hours to enter the government-run Abastos Bicentenario supermarket near downtown Caracas on Monday, and then waited another three hours to check out.

Checkout workers at Abastos Bicentenario were taking down customers’ cellphone numbers Monday, to ensure they couldn’t return for eight days. Shoppers said employees also banned purchases by minors, to stop parents from using their children to engage in hoarding, which the government calls “nervous buying.”

“People who go shopping every day hurt us all,” he said, drawing approving nods from the friends he made over the course of his afternoon slowly snaking through the aisles with his oversized cart.

Reflecting Maduro’s increasingly militarized discourse against opponents he accuses of waging “economic war,” the government is calling the new program the “system of secure supply.”

Patrons will register with their fingerprints, and the new ID card will be linked to a computer system that monitors purchases. On Tuesday, Food Minister Felix Osorio said the process was off to a smooth start. He says the system will sound an alarm when it detects suspicious purchasing patterns, barring people from buying the same goods every day. But he also says the cards will be voluntary, with incentives like discounts and entry into raffles for homes and cars.

Expressionless men with rifles patrolled the warehouse-size supermarket Monday as shoppers hurried by, focusing on grabbing meat and pantry items before they were gone.  (source)

Last year in Venezuela, it became a crime to “hoard” food, and the country’s Attorney General called upon prosecutors to crack down on “hoarders” by imprisoning them for the “crime”.

Some people may read this and think to themselves, “Why on earth do I care about what happens in Venezuela?”

You’d better care, because this is our future.

Already the Obama administration has moved the pieces into place on the board to be able to appropriate supplies from anyone, at any time.  Mac Slavo of SHTFplan warns:

It should be clear from the laws that are already in effect that the government has given itself a legal pretext for confiscating anything they so choose in the midst of an emergency.

Should an emergency befall the United States, the military, national guard, and local police operating under orders from the Department of Homeland Security will have carte blanche to do as they please.

In a widespread emergency where supply lines have been threatened and millions of Americans are without essential resources because they failed to prepare, the government will swoop in and attempt to take complete control.

They will enter our homes and search them without a warrant. They will confiscate contraband. And they will take any ‘excessive resources’ that you may have accumulated. This includes food, toiletries, precious metals and anything else emergency planners and officials deem to be a scarce material. (source)

Just think how much easier it would be to do so if every purchase you make is tracked and documented for future reference.

How Much of a Footprint Are You Leaving?

Now, think about those “loyalty cards” that every grocery store in North America promotes when you go through the checkout. Have you noticed how much more those are being pushed lately? Could there be a nefarious purpose to that?  I doubt the person at the cash register thinks twice about it – if these actually are data collection tools, it is something put in place by people far higher up the food chain (pun intended) than the staff of your local supermarket.

I strongly recommend you think twice about collecting “points” – the discounts may not be worth it if it means that your stock-up purchases are in some database, easily accessible to the NSA.  If you feel it is imperative to have one of those cards, consider using a pseudonym and false address.  You really don’t want to provide an inventory of your stockpile to the government. Some cards, like the one from Target, for example, even take it a step further and link to your credit card or debit account.  I can’t even wrap my brain around giving out that type of information to the person who rings up my paper towels and garbage bags.

To take this even further, if you haven’t been convinced yet that you need to begin producing your own food by gardening and raising micro-livestock, this should solidify the importance of not being totally dependent on “the system” for what you eat. Looking at the drought conditions across America’s farmland, is it a stretch of the imagination to think we could soon be facing rationing like that which is currently happening in Venezuela?  As the middle class gasps its last breath here in America, we may soon be faced with a situation where only the wealthy can afford to avoid rationing.  By becoming independent from the purveyors of food, you can assure that your family will not go hungry at the whims of a government who really doesn’t care.

Here are a few things that you can do to pre-empt feeling the effects of a system like the one in Venezuela before such a change occurs on our own soil. Start now to leave less of a footprint for the government to follow.

Whatever your plan, don’t delay. We need only to read the many articles predicting a food shortage this year due to poor weather conditions to see the writing on the wall. You must become responsible for your family’s sustenance if you don’t want to suffer at the hands of those in power. I have no intention of standing in line for hours with my “ID card”, only to be allowed to purchase a small amount of highly inflated food.