Visualizing the Shutdown – Better hope for no big outbreaks

The chart below quantifies the impact of the government shutdown on departments and agencies. You can view an interactive version at the WSJ using the link below. 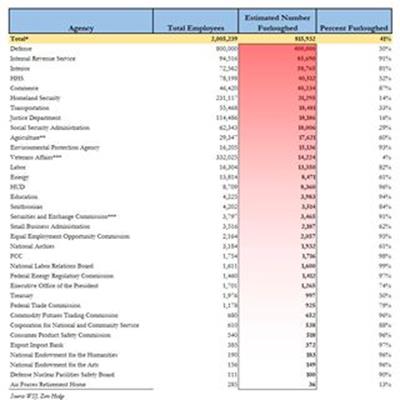 Better hope for no big outbreaks of hepatitis A, salmonella, or flu if the federal government shuts down.

A government shutdown will furlough 68% of staff – meaning 8,754 people — at the Centers for Disease Control and Prevention, according to a fiscal year 2014 “Contingency Staffing Plan for Operations in the Absence of Enacted Annual Appropriations” on the Department of Health and Human Services’ website.

That means no in-depth investigations to identify and link outbreaks that may be occurring simultaneously in multiple states, according to a CDC spokeswoman. While state public health investigators may detect outbreaks on their own territory, “we won’t be doing the cross-state consultation and laboratory work to link outbreaks that might cross state borders,” such as a hepatitis A outbreak earlier this year that sickened 162 people in 10 states, spokeswoman Barbara Reynolds said in an email. The CDC investigation helped link the infections to pomegranate seeds from Turkey.

Nor will CDC have staff or funding to fight measles outbreaks or monitor seasonal flu activity, she said. Surveillance for emerging diseases like MERS, the deadly virus that has sickened more than 130 people and killed 58, mostly in Saudi Arabia, will be limited, she said.

What will the remaining 4,071 CDC staff do? “Minimal support” to protect health and well-being, according to the HHS document. “We will keep our emergency operations center operating at a reduced capacity so we can gear up to stop a serious outbreak when it’s discovered,” Ms. Reynolds said.

And the fight against childhood obesity will go on, at least partly, thanks to a demonstration project funded by the CDC through the federal health law. Other programs whose funding isn’t pegged to the current debate in Congress will also continue, like global AIDS and a national program to provide vaccines to low-income children.