1/23 – New Al Qaeda video calls for attacks on the U.S., France and Britain over POTUS recog of Jerusalem as capital of Israel & decision to move embassy. See email.

Twice this week AlertsUSA subscribers were informed of new calls for attacks on the U.S. and other Western nations by both al Qaeda in the Arabian Peninsula (AQAP) and the Islamic State.

Early Tuesday, a senior al-Qaeda leader, Khalid Batarfi, called on Muslims “everywhere” to rise up and kill Jews and Americans in response to President Trump’s controversial decision to recognize Jerusalem as Israel’s capital. Batarfi said Trump’s decision was “a declaration of a new Jewish-Crusader war,” that every Muslim had a duty to “liberate” the holy city, and that “no Muslim has the right to cede Jerusalem no matter what happens.”

Batarfi was one of approximately 150 jailed AQAP members who were freed in 2015 when the militant group, regarded by the United States as one of the deadliest branches of the network founded by Osama bin Laden, captured the Yemeni port city of Mukalla where he was held.

Within 24 hours of the release of this week’s video message, the State Department announced that Batarfi had been added to the U.S. government’s list of specially designated global terrorists. “This designation seeks to deny Batarfi the resources he needs to plan and carry out further terrorist attacks,” State said in a press release.

AQAP claimed responsibility for 2015 attacks on the office of Charlie Hebdo magazine in Paris and often boasts of having one of the world’s most feared bomb makers, Ibrahim Hassan al-Asiri (see more on AQAP below).

On Friday, subscribers were also notified of a new video released by the Islamic State’s Al-Hayat Media group urging followers in Europe, America, Russia, Australia, and elsewhere to rise up and kill kuffars, or unbelievers. In what is one of the group’s most horrific videos to date, an English language nasheed (acapella chant) backs brief news clips of attacks in Las Vegas, San Bernardino, Paris, Nice, London, and Manchester. Also mixed in are brief clips of beheadings, throat cutting, burnings, severed heads being waved around, as well as clips of jihadists in battle.

From the Nasheed (punctuation added):

GO AND ANSWER THE CALL
DON’T SPARE NONE, KILL THEM ALL.
IT IS NOW TIME TO RISE,
SLIT THEIR THROATS, WATCH THEM DIE.

THE ISLAMIC STATE STANDS,
AND IT STANDS AND DEMANDS
THAT YOU WORSHIP THE ONE,
WHOM BESIDES THERE IS NONE.

THROUGH OUR BLOOD COMES SUCCESS
AND WE’LL GIVE IT OUR BEST,
TO DESTROY THE KUFFAR,
WE WILL SLAUGHTER THEM ALL.

SO MY BROTHERS ERUPT,
LET THE WORLD KNOW WE’RE UP.
BY THE WILL OF ALLAH,
WE WILL CONQUER THE WORLD. 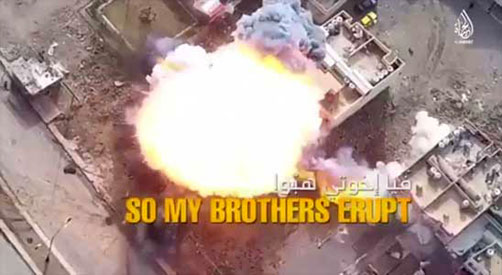 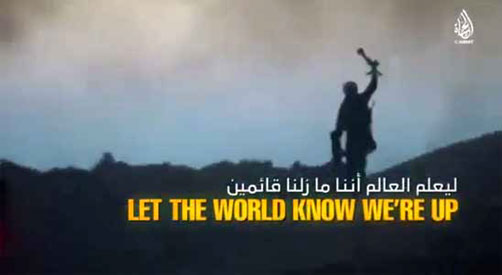 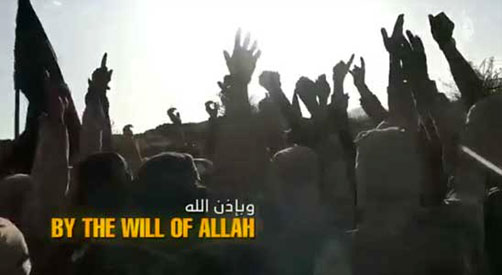 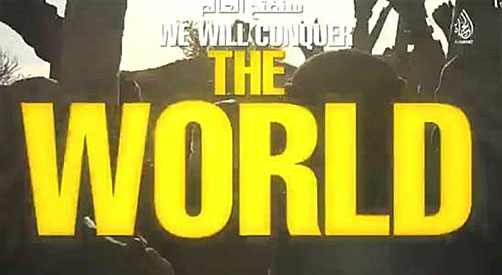 Citing intelligence pointing to an increased threat of a bomb being smuggled on board an aircraft bound for the United States, TSA administrator David Pekoske stated the following:

“The continued threat to commercial aviation calls for enhanced screening and security to protect international air travel direct to the United States. The countries were chosen because of a demonstrated intent by terrorist groups to attack aviation from them.”

“TSA looks at threats emanating from each country uniquely, and cannot provide specific information about those threats, but after analyzing evaluated intelligence, we determined that we needed to expand the ACAS program within each of them at this time.”

Under the new measures, airlines would be required to provide the Transportation Security Administration and Customer and Border Protection detailed information about all cargo destined for or transiting through the United States prior to being loaded onto aircraft.

In addition to new threat intelligence prompting this latest round of enhanced security measures, readers are reminded that in July of last year, U.S. and Australian authorities foiled a plot to smuggle an improvised explosive device onto an Etihad Airways flight from Sydney to Abu Dhabi. The particular flight targeted was carrying more than 400 people.

Another notable foiled plot occurred in October of 2010, within which two packages, each containing a bomb consisting of approximately 12 ounces of plastic explosives and a detonating mechanism, were found on two separate cargo planes. Both were bound for the U.S. from Yemen and were discovered en route during stop-overs, one at East Midlands Airport in the UK, and one in Dubai in the United Arab Emirates.

As a final note on this story, readers are reminded that as recently as April of last year, Al Qaeda in the Arabian Peninsula has made clear they continue to target the aviation sector for attacks. Just two years ago, the al Qaeda branch published what counterterrorism experts say was an extremely detailed, and potentially lethal, bomb recipe in the 13th issue of their internet magazine known as Inspire. Also included in that issue were instructions on getting the bomb through airport security and even where to sit on the plane to maximize damage.

Despite a recent lull in domestic terror attacks, the threat environment remains extremely serious. AlertsUSA strongly encourages readers to maintain a sensible level of personal security awareness and vigilance when in public places and gatherings. Leave the smartphone in your bag or jacket and pay attention to your surroundings. Make it a point to know the location of exits.

Get in the habit of “scanning and calculating.” Scanning involves continuously and subconsciously scanning one’s immediate area to identify potential security threats. Calculating is the mental planning of a response that takes place after scanning identifies a threat. After a little practice, these actions become second nature.

If you have a bad feeling about a person or situation, follow your instincts. While sometimes wrong or misread, your “gut” will often warn of actual threats not appearing in your conscious awareness. Trust it.

1/23 – The NWS Tsunami Warning Center has canceled the Tsunami Watch for CA: “A tsunami was generated by this event, but does not pose a threat to California.”

1/23 – Residents of the W. Coast of N. America from the MX border to AK should be paying attention. Tsunami WATCHES & WARNINGS in effect. 7.9 EQ in Gulf of Alaska..

The Russia threat is real — and it matters
Is it illegal to call someone a Nazi?
Nigeria’s Boko Haram attacks in numbers – as lethal as ever
Ethiopia could be sitting on one of the world’s great untapped gold deposits
Russia says new U.S. sanctions are destructive step, will retaliate
Catalan officials deny receiving CIA warning ahead of Barcelona attack
Russia is ready to ‘kill thousands and thousands’ of British people.
US, Europe huddle on Iran after Trump ultimatum
Will Russia Build 8,000 Nuclear Weapons by 2026?
Germany sends tanks to Lithuania as part of increased NATO presence