On ten occasions this week AlertsUSA subscribers were notified via SMS messages to their mobile devices regarding safety and security matters. Three of these alerts were sent Monday in relation a series of bomb blasts in Austin, Texas. In the first incident, Austin police were called to a home in the Windsor Park neighborhood of the city after a package left on the front porch of a residence exploded, killing a teenage male and injuring a female family member. Just a few hours later, a second explosion occurred at another residence approximately 5 miles away, severely injuring a 75-year-old woman.

Monday’s bomb blasts were in fact the second and third package explosions in the Austin area. On March 2nd, a 39 year old male was killed when a package bomb left on his door step exploded.

According to law enforcement:

In each of the incidents, all of the victims are racial minorities: one Hispanic, and two from prominent African-American families that know each other.

These bombings may be extremely difficult to solve in the short term.

The Austin Police Department is warning residents that if you receive an unexpected or otherwise suspicious package at your residence to call 911. Austin police have confirmed within 48 hours of this waring being issued, they responded to nearly 400 suspicious package calls.

3/14 – Tensions spike as UK PM expels 23 Russian diplomats over “first offensive use of a nerve agent on Alliance territory since NATO’s foundation.”

3/12 – UK PM says it is “highly likely” Russia responsible for nerve agent attack on former spy and daughter in Salisbury on March 4. See email for more.

Al Qaeda in the Arabian Peninsula Urges Attacks on Americans

Early this week Al Qaeda in the Arabian Peninsula’s (AQAP) al Malahem media foundation released the first edition of a Madad news bulletin after a hiatus lasting more than five years (download PDF copy here). In this issue, the publication focused on praising a jihadist named Ahmad Nasir Jarrar who was killed by Israeli Defense Forces (IDF) in early Feb following the shooting death of a rabbi in a West Bank Israeli outpost.

Of particular note to AlertsUSA Threat Journal readers is the call for attacks on Americans in retaliation for U.S. defense of the Jewish state and recent recognition of Jerusalem as it’s capital:

They must stand together as a solid structure and wage the ummah’s battle in various arenas and on many fronts. They must put aside all sins, conflicts and disputes that delay the victory. Liberating Palestine is a duty incumbent upon us. Every Muslim jihad fighter must act night and day to promote this cause.

But we must not forget the role played by the head of the serpent, America, in defending the Jews. The latest manifestation of this is insistence on turning Jerusalem into the capital of the Jewish occupier. As the Martyr of the Ummah, Osama bin Laden, said: “America and Israel are two sides of the same coin.” He also stated: “Do not consult anyone before killing Americans.”

Readers are reminded that President Trump formally recognized Jerusalem as Israel’s capital in early December of last year. On February 23rd, the U.S. State Department announced the U.S. would formally open an interim embassy in Jerusalem on May 14, which is also the 70th anniversary of the founding of the State of Israel. Both announcements set off a fire storm across the Arab world.

This is the 5th in a series of short, insightful videos by Dr. Bill Warner, a highly respected expert on political Islam. In 2006, he founded the Center for the Study of Political Islam (CSPI) to further the study of the politics of the ideology of Islam and its dangerous ramifications for Western Civilization. 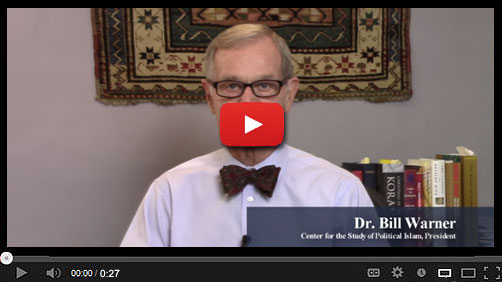 No, Trump’s Pick to Head CIA did NOT Oversee Waterboarding of Zubaydah
Army Has Spent 18 Months Preparing for War in Korea: Milley
In a first, U.S. blames Russia for cyber attacks on energy grid
Inside the US nuclear sub challenging Russia in the Arctic
Why Cuba’s Regime Will Survive the Castros
United Nations accuses Mexico’s police of torture
Brazil: Big rallies held after Rio politician is shot dead
Cold War: US Arctic Drills Prep For Frigid Fight
The US could finish off ISIS if Turkey would stop fighting the Kurds, DoD says
U.S. troops who repelled Russian mercenaries prepare for more attacks