7/12 – Toronto, Ont. police warn of a possible “vehicle ramming attack” in the vicinity of the CN Tower. Increased police presence across the city. Vigilance urged.

On Wednesday, AlertsUSA subscribers were informed of the release of a new Islamic State threat poster in circulation on social media targeting New York City. Within the image, a lone jihadist stands looking north at a bombed out and burning scene from a position near the intersection of Battery Place and West Street in Lower Manhattan. 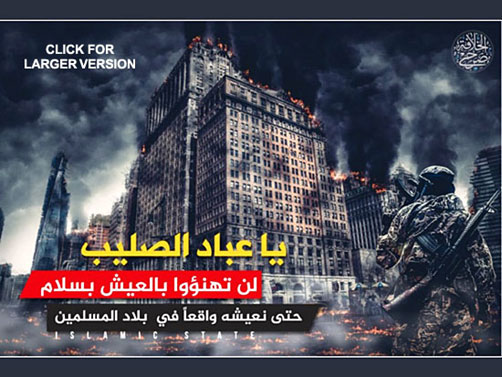 Three lines of Arabic text appear on the poster which read as follows:

Readers are reminded that a number of prior attacks carried out in the U.S. and Europe over the past few years either by or in coordination with the Islamic State, or their supporters, have been preceded by the release of such propaganda posters. As such, continued vigilance and situational awareness is urged.

On Thursday, AlertsUSA subscribers were informed of a warning by Toronto, Ontario police that they has received “credible information” regarding a potential vehicle ramming attack in the area of the CN Tower located in the downtown core of the city. While the Toronto Police Service still declines to provide any specifics about the threat, the information was deemed credible enough to dramatically ramp up the law enforcement presence in the downtown area, including the deployment of Chemical, Biological, Radiological, Nuclear and Explosives (CBRNE) teams and other emergency task force assets.

Here again, readers are reminded that on April 23rd of this year, a Canadian national, Alek Minassian, race a rented Chevrolet Express van on the sidewalk over the course of several blocks of the North York City Center business district of Toronto, deliberately targeting pedestrians. 10 were killed and 16 seriously injured in the attack.

On Friday, AlertsUSA subscribers were informed of a new security alert issued by the State Department for Juarez, Mexico (located just over the border from El Paso, TX). Quoting from the official alert message:

“Because of a marked increase in homicides throughout Ciudad Juarez, including an increase in shootings in the highly frequented downtown area during daylight hours, U.S. government personnel are prohibited from travelling to downtown Ciudad Juarez without advance permission from the Regional Security Office for the next 30 days. The restriction covers both official and personal travel and includes the area west of Avenida de Las Americas. All approved official travel must be in an armored vehicle.”

7/12 – POTUS has arrived in the UK. Large protests forming. AlertsUSA reminds of embassy guidance to keep a low profile & to use caution near large gatherings.

7/9 – US State Dept raises the travel advisory for Haiti to Level 4. DO NOT TRAVEL due to widespread unrest & violent crime. See email for full advisory.

7/8 – State Dept. urging US citizens in Haiti to cont to shelter in place due to demonstrations, roadblocks, & violence across the country. See email for more info.

The U.S. House Committee on Homeland Security released the July 2018 edition of its monthly Terror Threat Snapshot on Tuesday, June 10. The report details global terrorist activities and attacks. This month’s report highlights information on ISIS’s terror campaign in Europe, the number of ISIS linked plots against the West since 2013, and statistics on homegrown jihad cases since 2013.

Key points from the July 2018 Terror Threat Snapshot include:

– On June 27, 2018, Libyan militia leader Ahmed Abu Khatallah was found guilty on four of 22 charges and sentenced to 22 years in prison for his role in the 2012 attack on the U.S. consulate in Benghazi, Libya.

– Homegrown Islamist extremism continues to be an issue, as there have been 154 homegrown jihadist cases in the U.S. since 2013.

The report also covers recent developments in the U.S. against terrorism in June 2018, including the arrest and/or imprisonment of nine individuals. Information is also provided regarding recent plots and attacks by various terrorist groups as well as operations against those groups, including ISIS, Al Qaeda, Boko Haram, the Taliban, and Al-Shabaab.

What To Expect From A Trump-Putin Summit

Donald Trump has been consistent in his desire to make a “deal” with Vladimir Putin since he first began campaigning for president and in his conviction that, unlike his predecessors, he can pull off a successful reset with Russia. For the past eighteen months, the various “Russiagate” investigations—and the skepticism of his secretaries of state and defense and his National Security Advisors—have constrained his ability to pursue his agenda with Russia. But, fresh from what he views as a successful summit with Kim Jong-un, his determination to meet with Putin for a bilateral summit has prevailed. They will meet in Helsinki on July 16. Read more here.

Helsinki Summit: What Can Trump & Putin Learn From Finland?

Presidents Putin and Trump will meet soon in Helsinki. At a time of uncertainty in the US-Russia relationship, the meeting is an important step forward in clarifying that relationship, one that should be not reduced to a Trump tweet or a Putin chess move. Read more here.

NATO Is Sick, And Trump Is The Best Doctor It’s Likely To Get

NATO is needed and always will be as long as threats to the West exist in the form of Russia and state sponsors of terrorism such as Iran, whose utmost desire is the weakening if not destruction of Western civilization. But support for NATO, just like support for free trade, does not mean that the status quo must be protected and left unchallenged. Read more here.

Mexico’s Next Crisis Will Arrive From the South

In the wake of Andres Manuel Lopez Obrador’s historic victory, the markets are focused on Mexico’s economic prospects, keenly sniffing for any whiff of either pragmatic promise or populist calamity. Yet while a financial crisis is possible, Central American migration may prove the new administration’s biggest first challenge. Read more here.

Why Spain Could Be the European Populists’ Next Battleground

When Italy’s interior minister, Matteo Salvini, refused to let the rescue ship Aquarius – which was carrying 629 men, women, and children – land, the European Union was presented with yet another migration emergency. The vessel was stranded for days in the Mediterranean looking for a place to dock, with an EU-wide solution nowhere to be found. Eventually, Spain’s newly-installed socialist government stepped up and allowed the boat to dock. But just as is happening in Italy, Greece and Germany, there may come a time when the Spanish public gets tired of being Europe’s latest welcome mat for tens of thousands of people trying to flee Africa. Read more here.

The 4 key things to watch for at the Trump-Putin summit
Mexico: 40% of country is paralyzed by violence, says new chief of staff
Stolen U.S. Military Drone Documents Found for Sale on Dark Web
The USAF Is Hiding Its Controversial Flyoff Between the A-10 and F-35
US indicts 12 Russians for hacking DNC emails during the 2016 election
US Air Force: Hypoxia Among Pilots Mysterious, But Real
CIA’s top recruiter on how the agency finds – and keeps – its spies
Trump blasts UK PM May’s Brexit plan, says it puts trade deal in doubt
Trade War With China Exposes U.S. Mineral Import Problem
Nicaragua unrest death toll rises before new protests
Venezuelans are starving, but the country still sends crude to Cuba
LOL: Schumer ‘afraid’ of what Trump will agree to in Putin meeting