When the Trucks Stop, America Will Stop (With Immediate and Catastrophic Consequences) 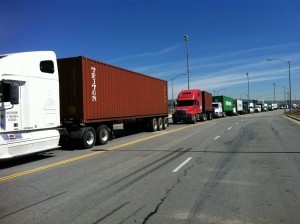 Most Americans take for granted the intricate systems that make it possible for us to engage in seemingly mundane day to day tasks like filling up our gas tanks, loading up our shopping carts at the local grocery store, obtaining necessary medications, and even pouring ourselves a clean glass of water. When we wake up each morning we just expect that all of these things will work today the same way they worked yesterday. Very few have considered the complexity involved in the underlying infrastructure that keeps goods, services and commerce in America flowing. Fewer still have ever spent the time to contemplate the fragility of these systems or the consequences on food, water, health care, the financial system, and the economy if they are interrupted.

A report prepared for legislators and business leaders by the American Trucking Associations highlights just how critical our just-in-time inventory and delivery systems are, and assesses the impact on the general population in the event of an emergency or incident of national significance that disrupts the truck transportation systems which are responsible for carrying some ten billion tons of commodities and supplies across the United States each year.

A shut down of truck operations as a result of elevated threat levels, terrorist attacks, or pandemics would, according to the report, have “a swift and devastating impact on the food, healthcare, transportation, waste removal, retail, manufacturing, and financial sectors.”

So too would events such as an EMP attack or a coordinated cyber-attack that could shut down global positioning systems and the computers responsible for inventory control. Another potential scenario that is more likely now than ever before is liquidity problems within the financial system stemming from currency crisis or hyperinflation. All of our just-in-time delivery systems are built upon the unhindered transfer of money and credit, but when credit flow becomes restricted or money becomes worthless, no one will be able to pay for their goods. Likewise, no one will trust the credit worthiness of anyone else. This is exactly the scenario playing out in Greece right now and the consequences on the health care industry in that country have left many without life saving drugs. When there’s no money, no one will be transporting anything.

The effects of a transportation shutdown for any reason would be immediate (in some cases, within hours) and absolutely catastrophic.

While an event that disrupts truck transportation systems may be unlikely, recent history suggests it is fully plausible and the blowback can be devastating. A day after Hurricane Katrina ravaged New Orleans, panicked government officials stopped all transportation flow into the region, forcing hundreds of trucks loaded with emergency supplies like food and water to wait for permission before they could enter the area. As a result, thousands of residents of the city were left without items essential for survival. It took days before truck routes were re-opened and supplies were allowed to flow. Government officials acting on limited information, lack of knowledge and personal politics were responsible for restricting the flow of goods into New Orleans, potentially killing hundreds of people in the process.

What this incident demonstrated is that when the trucks in America stop, all commerce and delivery stops with it.

Now consider what may happen if the emergency is more widespread, affecting not just a city, but the population of an entire region or the United States in its entirety.