This probably should have been the first post on the orienteering series, but it fits well here too.  The next post or two deals with some concepts that are a bit tricky and you’ll actually have to put your thinking caps on and maybe do a few examples of your own. 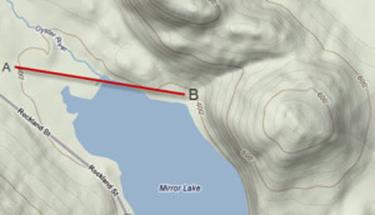 Why should I learn it when I’ve got a GPS in my pocket that will tell me exactly where I am and give me directions on where I need to go?

Let’s go to a pretend world for a bit…

The grid is down.  The global economy went to hell three months ago and despite all the promises by the government and news media things aren’t getting better.  After the first month food deliveries were sporadic at best and despite a police presence outside most of the supermarkets in town there are very few supplies left.  Rioting has been reported in some of the larger cities.

After the first month of not getting paid a growing number of people stopped showing up for their jobs and without skilled engineers and workers the power plants supplying electricity slowly went off line.  It’s not out completely, but with rolling brown outs and black outs electricity just can’t be depended on.

It wasn’t like everything crashed at once.   It was more like the frog in the pot where the water is slowly brought up to boiling.  Things deteriorated slow enough that it prevented you from triggering your bug-out plan and now you’re stuck in your apartment with your wife and two sons.  Luckily they’re old enough to walk long distances and you feel like you’ve raised them right and can rely on them in case of an emergency.

You’ve decided to head for the doomstead you have set up with two other families and you kick yourself for not going right away.  There’s no more gas for vehicles, so that means you’re going to bug out on foot cross country.  Your GPS tells you your destination is 88 miles northwest as the crow flies.  You figure you can do it in four days with your family if you push them hard enough.

Three days later you realize you’re still at least four days away.  Nothing has gone right.  You had to ditch some gear from the packs because they were too heavy for walking.  There have been roadblocks not mentioned by the media and you’ve had to take the family off the road and circle around them praying you don’t get spotted.

And this afternoon  the batteries in your GPS died and you discover the spares you packed in your BOB two years ago are dead too.  Didn’t the manufacturer claim these batteries would last ten years in storage?  You make a mental note to write a strongly worded letter to the company.

Now what?  You’re a little more than halfway to the doomstead, food is running low, and now you’ve lost the only means of navigation you had.

You break the bad news to the family, but your 16 year old son – the Boy Scout – does something strange.  Instead of panicking he grabs his pack and pulls out a map and compass.   You show him where you are on the map and he plots a direction to your bug-out location.  Then he picks up the compass and declares he’s going to take point and leads the way.

Four days later you arrive.  Hungry, tired, and foot sore, but you made it.

You tell your son how proud you are of him and thank him for saving the day.

Oh, maybe the story is just a little dramatic, but you get the point.  GPS batteries only last for so long and if you’re trusting your life to a piece of electronic wizardry you’re gambling with your life and the lives of whoever is with you.  If you think you won’t run out of batteries in an extended emergency you are dead wrong.  Just don’t get dead because of it.

And what happens if the satellites fail?  Oops.

I was on a mountain with my smart phone recently using it as a GPS and it was fantastic.  When you can look at a device and know exactly where you are and what’s over the next rise it doesn’t get better than that.  But I was using it heavily and after just a few hours the battery was very low.

Of course I had a map and compass and went back to doing it the old fashioned way.

I’ve read many stories where someone has followed GPS directions blindly down back roads only to wind up stuck for days and sometimes even got themselves dead because of it.  Always have a manual backup and the knowledge of how to use it.

Like I said earlier, map reading is hard and it will take some work to get proficient at it.  You don’t have to get to the point where you’re looking for a ten meter square clearing in a huge forest, but if you can point a compass and follow an azimuth there’s a good chance that you’ll eventually get to where you’re going.  And you don’t have to worry about the batteries dying.

Don’t get me wrong.  I’m not saying don’t use a GPS.  They’re awesome devices.  What I am saying is learn the skills necessary to stay alive in case something happens to your device, whether you drop it in water, break it or the batteries die it’s always good to have a backup.