I have been hearing a lot about the new surge in solar energy.  Technology has vastly improved, costs are coming down, and great rebates are available from electric companies and federal and state governments.  What I didn’t know is that I could be using solar energy every single day, saving money on my electric bill, and keeping my kitchen cool at the same time! 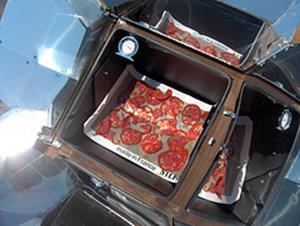 I had the opportunity to sample homemade bread and a fabulous peach cobbler, both baked in a solar Sun Oven.  I was thoroughly impressed and ran home to tell the Paranoid Dad that we simply must own one of these contraptions!  Here’s what appealed to me the most.

First, seasonal electric bills can be sky high.   With new government regulations looming on the horizon, they will likely only get higher.  According to my resident expert, the Paranoid Dad, the typical home would recoup the price of the oven via savings in their electric bill in eight to nine months.  With the Sun Oven, my baking is virtually free and I won’t use even an ounce of fossil fuel!

I love saving money, but I love the idea of self-sufficiency even more.  I have been a little nervous about my food storage because a lot of it requires a heating source, either gas or electricity, to prepare.  Should our city experience black-outs or if there was a failure of our vulnerable electrical grid, I’ll still be able to keep my family well fed using a solar oven.  I like the idea of having that extra “safety net”.

There’s virtually nothing that can’t be baked in a solar oven.  I can even use it to hard boil eggs!  Cookies, casseroles, steamed veggies, and roasted chicken are just a few examples of its’ versatility.  Add a solar cookbook or two, and we’ll never miss our traditional oven.  Heck, I might even be inspired to cook more often!

I’ve spent a lot of time on the official Sun Oven website, scoured their list of recipes, and am pretty impressed with the product.

Have you used a solar oven?  What are your own hits and misses?