NASA’s preparing another round asteroid defense tests, thanks to the October fly-by of a rock that may come within a cosmic whisker of the Earth.

Asteroid 2012 TC4 is said rock, and is between ten and thirty meters across. NASA says it is “certain it will come no closer than 4,200 miles (6,800 kilometers) from the surface of Earth.” That’s a very close encounter indeed given the term “nearby” is applied to rocks that get anywhere inside lunar orbit.

We don’t know a lot about 2012 TC4 because when it was spotted by the Pan-STARRS 1 telescopes in Hawaii, we only got a look at it for seven days.

That’s not a bad thing for a dry-run asteroid-spotting campaign, something proposed by University of Arizona astronomer Vishnu Reddy.

As Reddy explains in the University’s announcement, what’s on the table is “an observational campaign to exercise the network and test how ready we are for a potential impact by a hazardous asteroid”. 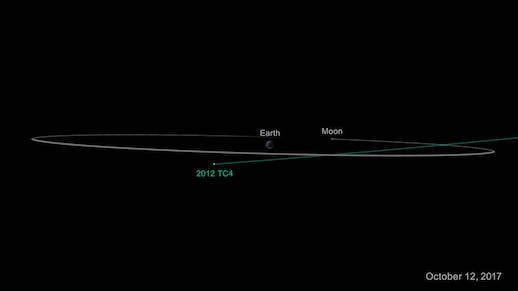 “The goal of the TC4 exercise is to recover, track and characterize 2012 TC4 as a potential impactor in order to exercise the entire system from observations, modelling, prediction and communication”, the university says.

NASA adds that the uncertainty is big enough for 2012 TC4 to pass 270,000km away from us – another reason the flyby is a good test for the PDCO’s abilities.

More than a dozen universities, observatories and labs worldwide will look for 2012 TC4 to work out its trajectory and its size, which is in the vicinity of the rock that rattled Russian city Chelyabinsk in 2013.