8/18 – Several people stabbed in Turku, Finland by at least 1 attacker screaming “Allahu Akbar”. One assailant shot and in custody. Add’l alerts as warranted.

8/17 – Spanish authorities activate call center for relatives of people that could be affected by Barcelona incident: +34 900400012 .

On 16 occasions this week AlertsUSA subscribers were notified via SMS messages to their mobile devices regarding security matters. Most pressing for this report, early in the week, subscribers were informed of al Qaeda in the Arabian Peninsula’s release of the 17th issue of the online news and fieldcraft magazine known as ‘Inspire’ (clean PDF), in which a majority of this issue is devoted to attacking different means of commercial and civilian transportation in the U.S. and Europe. Three modes of attack are explored, including strikes on the actual transport mechanism such as planes and trains, strikes on airports and train stations when they are full of people, as well as on the transport lines and pathways.

Of particular importance, and which has raised significant concern within local, state and federal agencies in the past week, is the emphasis on planning and staging train derailments, including step-by-step guidance on how to fabricate a steel-reinforced concrete derailing tool which attaches to individual tracks to force the wheels up and out of alignment. In addition to the hand’s on guidance, the issue also explores rail system vulnerabilities and even references testimony on the difficulty of protecting the national railroad infrastructure by the General Accountability Office before the Senate Committee on Commerce, Science and Transportation. 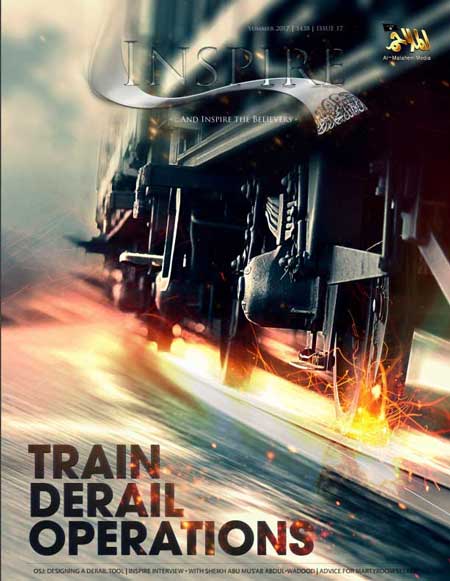 This is a must-read publication for local, state and federal law enforcement, as well as rail transportation stakeholders and workers so you are up to speed on tactics in what is likely to become an increasingly popular jihadist target.

Europe was shaken this week by multiple terror attacks, each bearing the hallmarks of previously published guidance and fieldcraft from the Islamic State and al Qaeda in the Arabian Peninsula. Starting on Monday, AlertsUSA subscribers were notified of an incident in Sept-Sorts, France, located northeast of Paris, within which a lone male intentionally drove his car across a dining patio and into a pizzeria, killing one and seriously injuring eight others.

On Thursday 14 people were killed and more than 100 injured when a rented Fiat van was intentionally driven into revelers along a 500-meter stretch of Las Ramblas pedestrian boulevard in Barcelona, Spain. The 17 year old driver of the van, Moussa Oukabir, fled on foot after the van crashed, and several hours later,turned up in the coastal resort town of Cambrils. There, Moussa and four others carried out yet another vehicular assault on pedestrians before smashing their Audi A3 into a police car stationed at a checkpoint. Seeing the attackers emerging from the car with knives, machetes and axes, a single officer immediately shot and killed four. The fifth attacker escaped and stabbed a pedestrian in the face before being shot dead by a second officer.

Individuals killed and injured in the Barcelona attack came from 18 different nation, including one American.

Spanish police believe the Barcelona and Cambrils attacks are also related to an explosion one night earlier at a house in the small town of Alcanar, 120 miles southwest of Barcelona, which killed one person and injured 16. Police initially thought the explosion was caused by a buildup of natural gas inside of the home. Upon a second inspection, police report finding a large supply of LP gas bottles and traces of the explosive compound TATP ( triactetone triperoxide), leading them to conclude the explosion was likely caused by error during the construction of bombs.

On Friday AlertsUSA subscribers were informed of a warning issued by the State Department that Spanish officials were still hunting for at least one suspect in this terror cell.

The Islamic State Amaq News Agency has issued a formal claim of responsibility for Spain attacks.

Readers may find it interesting that Cambrils, Spain is located less than 3 miles from the town of Salou. Well known in intelligence circles, Salou is the location where Mohamed Atta, the pilot of 1st plane to fly into the World Trade Center during the 9/11 attacks, held a key planning meeting with an al Qaeda figure earlier in 2001.

Also on Friday, AlertsUSA subscribers were notified of an incident in Turku, Finland within which an individual carried out a knife attack in a market square while screaming “Allahu Akbar,” killing two and injuring several others before being shot in the leg by a police officer. According to news reports, the suspect, who intentionally targeted women in the attack, arrived in Finland in 2016 and had been “part of the asylum process.”

Last Saturday AlertsUSA subscribers were informed of an increasingly tense political demonstration in downtown Charlottesville, VA and a police recommendation to avoid the area. Soon after that alert was issued, a speeding car was intentionally driven into a crowd of protesters, kill one individual and injuring at least 19 others.

Since this attack, racial and political tensions have dramatically increased across the U.S., with more expected in the coming days and weeks as various groups plan more demonstrations for an assortment of causes, the most prominent of which are anti-white supremacy / racism and the removal of Confederate civil war monuments and symbols. .

It is curious that with all of the rage and indignance being shown towards any symbol even remotely related to the Confederacy, and thus, African slavery, why has none of this anger been expressed towards Islam?

The Prophet Muhammad owned many black slaves and referred to Ethiopians as ‘raisin heads’ (VIDEO).

African slavery in the Middle East was more widespread & brutal than the American counterpart.

The Myth: Muhammad was an Abolitionist

As the personal goal of every devout Muslim is to emulate Muhammad and to follow the teachings of the Koran, why are there no efforts focused on the closure or tearing down of mosques across America? Despite their history with African slavery, why is Islam celebrated, embraced and even protected by Progressives and the Left? Where is the equivalent outrage? Or could it be that the anger and indignance is feigned and something else is in play?

Readers should not forget the overarching threat still posed by N. Korea. Beginning Monday August 21, tens of thousands of military soldiers from S. Korea, the U.S., Canada, the UK, Australia, New Zealand and Denmark will participate in the Ulchi Freedom Guardian military drills in S. Korea and in the waters surrounding the peninsula. The training exercise, held yearly, invariably causes N. Korea to lash out with threats frequent demonstrations of force. The Ulchi Freedom Guardian exercise on will continued through August 31.

8/12 – Via state-run newspaper, N. Korea again taunts POTUS saying armed forces of DPRK now “on the standby to launch fire into its mainland” (referring to the U.S.).

* Homeland Security Threat Info Direct to Your
Mobile Device
* Get Away Early, Give Your Family Extra Safety.
* In Wide Use By Gov, 1st Responders, Travelers.
* 24/7/365 Monitoring. No Hype. Just the Bad Stuff.
* Issued Hours and Days before the MSM.
* On your Cell Phone, Tablet or Email.
* We Give The Clear Truth, Unlike the MSM.
* Over a Decade in Operation!

India, China soldiers involved in border altercation
Beijing is using underwater drones in the South China Sea to show off its might
N. Korea shows the U.S. Capitol being destroyed in propaganda posters
South Korea gave Kim Jong-un a ‘red line’
What will Kim do next? Sixth nuclear test seen critical for North Korea
Has China Finished Its Island Building Campaign In The South China Sea?
A Global Fish War is Coming
The US Is Headed Toward Another Cuban Missile Crisis