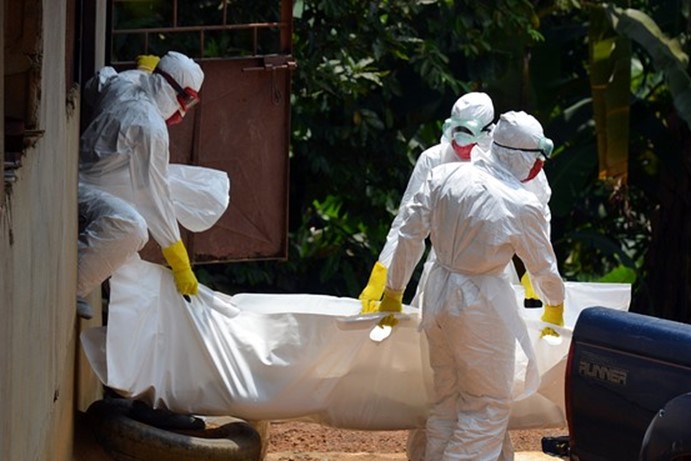 Red Cross health workers carry the body of a victim of the Ebola virus on Sept. 12 in Monrovia, Liberia.

The U.S. Centers for Disease Control and Prevention said the disease could balloon in the country.

Two leading public-health agencies issued dire warnings about the Ebola epidemic in West Africa, estimating that the number of cases could grow exponentially unless measures to tame the outbreak are implemented on a large scale soon.

The U.S. Centers for Disease Control and Prevention said that from 550,000 people to as many as 1.4 million people when underreporting of cases is taken into account could be infected by mid-January in Liberia and Sierra Leone, in a worst-case scenario generated by a computer modeling tool the agency constructed. Around 21,000 cases would occur by Sept. 30.

The bleak estimate was made at the end of August, before big pledges of aid started rolling in and before the U.S. military hit the ground in Monrovia, as it has in the past few days, to help lead a beefed-up U.S. response.

Experts from the World Health Organization and Imperial College, London, also predicted that the number of cases in West Africa would climb exponentially, saying more than 20,000 people would have been infected by early November, in a paper published in the New England Journal of Medicine.

“Without drastic improvements in control measures, the numbers of cases and deaths…are expected to continue increasing from hundreds to thousands per week in the coming months,” the authors wrote.

The differing numbers illustrate the range of scenarios that could occur—and the difficulty of predicting what might happen over the next several weeks and months.

Officially, 5,864 cases, including 2,811 deaths, have been reported in five West African countries, according to the WHO. But the United Nations agency says that toll is vastly underestimated.

Both agencies agree that the situation is grim without an imminent surge of aid.

Yet if 70% of Ebola patients are cared for in treatment centers or community settings where they can’t transmit the disease to others, then the epidemic in both countries “would almost be ended” by Jan. 20, according to the CDC report.

“What the modeling shows us is that even in dire scenarios, if we move fast enough, we can turn it around,” CDC Director Tom Frieden said. “And I’m confident that the most dire projections are not going to come to pass, given what we’ve already seen on the ground in terms of the response and what we’re beginning to see in terms of some of the data coming in.”

Dr. Frieden added that “a surge now can break the back of the epidemic. It also shows that there are severe costs of delay.”

The U.S. plans to bring in 3,000 military personnel to help build Ebola treatment centers and train health workers to staff them.

The CDC has about 120 staff in West Africa, and is beginning a training program in the U.S. for health workers preparing to deploy to the region.