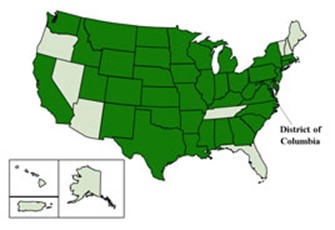 The Centers for Disease Control and Prevention (CDC) issued a warning about a mysterious polio-like virus that’s causing acute neurological illness and paralysis in children. The virus seems to be related to the nationwide epidemic of EV-D68 that we reported on during the first weeks of the outbreak.

The CDC is investigating nine cases of muscle weakness or paralysis in Colorado children to see if enterovirus 68 (EV-D68) might be the virus responsible for the neurological symptoms.

The Centers for Disease Control and Prevention issued a Health Advisory to doctors about the polio-like cases in Colorado, and said EV-D68 was detected in four out of eight of the sick children who were tested for the virus.

The CDC says the mysterious illness is characterized by “focal limb weakness and abnormalities of the spinal cord gray matter on MRI.”  The cases, which are just now being made public, occurred between August 9 – September 17 among children aged 1-18 years old (with a median age of 10 years-old).

The nine children who have been confirmed to have this neurological illnesses all had fever and respiratory illness about two weeks before developing varying degrees of limb weakness. Health officials don’t think its polio because eight of the nine children are up to date on their polio vaccinations.

The CDC, in their health advisory, confirmed that they are looking into the possibility that the nationwide outbreak of EV-D68 is causing the polio-like illness. They are asking doctors form around the country to be on the lookout for similar cases and to report any similar neurological illnesses to the CDC.

The Mysterious Virus that really isn’t a Mystery!

As we reported in our first article on the EV-D68 outbreak, the CDC and our Federal government is completely ignoring the fact this this virus seems to have been spread by illegal immigrants who’ve been dumped throughout the country – thanks in large part to the Obama administration.

Although it’s received very little mainstream media coverage, the current outbreak of EV-D68 is common to El Salvador, Honduras and Nicaragua, three countries where a bulk of the illegal immigrant children come from. These unaccompanied illegal immigrant children have been allowed into the nation’s school systems without medical screenings, and without required vaccinations.

The CDC may be pretending that they have no idea where this outbreak came from, but for months now similar neurological illness outbreaks have been occurring in border towns throughout the U.S.. In fact, back in February of 2014 an outbreak of a polio-like illness caused as many as 25 children in California to come down with paralyzed limbs and little hope of recovery. According to the BBC, at least five of these cases were directly linked to enterovirus-68, proving the CDC has known about this outbreak for quite some time now.

In July of 2014, the Inspector General of the Department of Homeland Security confirmed that communicable diseases were being spread throughout detention centers setup to house incoming illegal immigrant children. These children were then being dumped in unsuspecting communities around the country.

The report said, “Many UAC and family units require treatment for communicable diseases, including respiratory illnesses, tuberculosis, chicken pox, and scabies,” the IG report said. “UAC and family unit illnesses and unfamiliarity with bathroom facilities resulted in unsanitary conditions and exposure to human waste in some holding facilities.”

Unless this government starts to control the crisis at the border, this is only the beginning. When you allow entire populations of people into a country without medical screenings, the results are actually quite predictable.

This isn’t a mystery; it’s well-known medical science. This is exactly why we once required medical screenings of all incoming immigrants, and why we built special islands in New York’s Harbor to quarantine incoming ships. When you introduce new populations to a country, you introduce diseases that have not been seen in that area. You also immediately increase the risk of deadly disease outbreaks.