EBT System Crash: 16 States Out of Service: “How Am I Going to Feed My Family?” 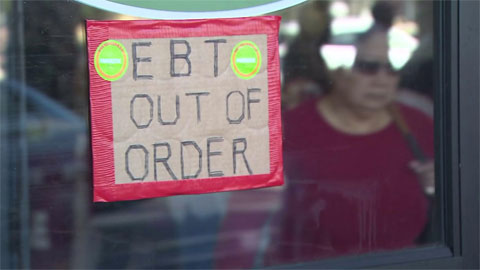 (Pictured: Grocery stores and retailers are posting signs for shoppers about the Electronic Benefits Outage)

The Electronic Benefits Transfer system responsible for providing 50,000,000 Americans the means to put food on the table has crashed.

The outage is reportedly affecting at least sixteen states.

Via The Organic Prepper:

According to a Xerox spokesperson, a routine system check by the vendor resulted in system failure, leaving assistance recipients across the country with no way to buy food.

Xerox spokeswoman Karen Arena confirmed via email Saturday afternoon that some Electronic Benefits Transfer systems are experiencing temporary connectivity issues. She said technical staff is addressing the issue and expects the system to be restored soon. U.S. Department of Agriculture spokeswoman Courtney Rowe underscored that the outage is not related to the government shutdown. Xerox runs EBT card systems for 17 states and all were affected by the outage. (source)

Users of EBT (Electronic Benefits Transfer) cards in California, Ohio, Michigan and several other states are unable to make purchases due to connectivity issues.

But it gets worse…

Xerox is notifying retailers to revert to the manual system, meaning SNAP customers can spend up to $50 until the system is back online. SNAP recipients should call the 800 number on the back of their card, and Xerox will guide them through the purchase process. (source)

However, that system is not working either – it’s “closed for maintenance.”

Shoppers left carts of groceries behind at a packed Market Basket grocery store in Biddeford, Maine, because they couldn’t get their benefits, said fellow shopper Barbara Colman, of Saco, Maine. The manager put up a sign saying the EBT system was not in use. Colman, who receives the benefits, called an 800 telephone line for the program and it said the system was down due to maintenance, she said.

“That’s a problem. There’s a lot of families who are not going to be able to feed children because the system is being maintenanced,” Colman said. “No one should put maintenance in during the daytime.” (source)

Despite the fact that government workers report orders from the Obama administration to “make life as difficult for people as we can”, the nation is assured that the EBT failure is in fact due to server issues and NOT due to the government shutdown.

If you ever wanted to know what the United States might look like and how people will react should the EBT system fail, then pay close attention

I go to the register and they ask me “how you going to pay.”

I said with food stamps.

“Oh, we’re shut down, you can’t pay with food stamps.”

I got kids to feed. You know?

And because the government’s down I can’t feed my family?

What’s going on with America? Now they trying to starve us to death?

…I got six kids I have to feed.

I’m just trying to figure out how to get something to eat.

More from Zero Hedge via The Daily Sheeple: