Finding Your Way Back Home Without a Map and Compass

The logical thing, of course, would be to have maps and a compass on board at all times. The first reality is that a disaster, whether wrought by Mother Nature or man, can happen when we least suspect it.  The second reality is that unless you are the exception to the rule, you probably do not have a compass and map with you at all times. 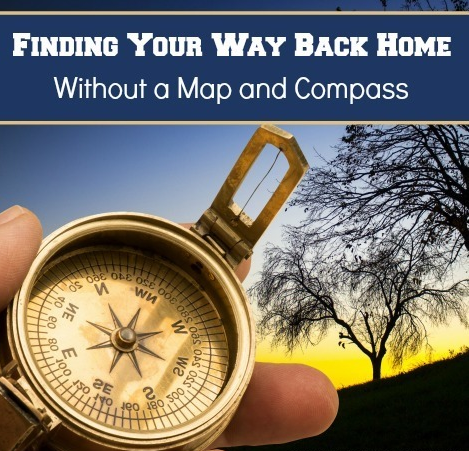 That begs the question: how do you go about finding your way back home without a map and compass?

Primitive navigation is not my thing.  I can find my way home with a chart and a compass rose, or an old Loran C (does anyone else remember those?) no problem.  And of course, a GPS is a cinch.  But I need to do better.

For this article, I called upon my friend and fellow blogger, Jim Cobb, to answer the question of finding our way back home when all we have with us is are wits and will to get there.

We’ve all been there at least once or twice.  Traveling through an unfamiliar area and realizing you have absolutely no idea where you are or how to get back on track.  It can be rather frightening, especially if you’re in a questionable urban area or perhaps out in the bush and the sun is setting.

Fortunately, over the past centuries mankind has learned a thing or two about determining direction using indicators found in nature.  We can use these naturally occurring clues to help us find our way.  We all know, or should know by now, that the sun rises in the east and sets in the west.  So, if it is early morning or late afternoon, you should be able to orient yourself that way, if nothing else.

Perhaps one of the easiest primitive navigation tips to start with is to learn how to locate the North Star.

Many of us were taught this when we were kids but perhaps have forgotten it over the years.  Find the Big Dipper, which is usually pretty easy.  Look at the two stars that make up the outer edge of the “cup” on the Big Dipper.  Draw an imaginary line connecting those two stars and extending out beyond the “open” end of the cup.  That line will lead you to the North Star, which is also the last star in the “handle” of the Little Dipper.

Knowing where the North Star rests in the sky will help you find all four compass directions.  But, that only works at night, what about during the day?

Find a reasonably straight stick and jam it into the ground.  If you’re in the northern hemisphere, the shadow created by the stick will point in a northern direction.  Not precisely north, of course, but with a little time, we can improve on this primitive compass a bit.  Place a golf ball size rock at the top of the stick’s shadow.  Come back in 15-20 minutes and you’ll see the shadow has moved a bit.  Place another rock at the new location.  Do the same thing 2-3 more times and you’ll have a line of rocks that follows a generally east-west direction.  The shadow still points north so the rock line to the left points west and the line to the right points east.

If you’re lost in an urban area, you might not want to take the time to find a good spot to jam sticks into the ground and wait an hour to figure out compass direction.  There are, however, a few tips and tricks you can utilize to at least get yourself to a better location.

For starters, and this is sort of a “duh” type of tip but bear with me, building numbers increase as you travel away from the city center.  Now, the “city center” might not be the exact middle as seen on a map, it depends on where they started their numbering system.  But, in general, the numbers go up as you travel toward the outside border of the city.  In many areas, though this isn’t any sort of rule that applies everywhere, three digit numbers indicate you’re within city limits, four digit numbers mean you’re in the city suburbs, and five digits mean you’re out in the sticks.  Again, there are a ton of exceptions to that but it follows true more often than not.

If you pass a cemetery, it might be useful to know that gravestones generally face east.  The reason for this is that in Christian doctrine, when Jesus returns He will do so in the east so those who are buried and will rise again will do so already facing in His direction.

Along those same lines, most Christian churches, especially the older ones, were built along a west to east line.  As one sits in the church and faces the altar, one is facing east.  Given that many churches are built such that it is a straight line from the front door to the altar, you can surmise that facing the front door means you’re facing east.

Most satellite TV systems utilize satellites that sit in geosynchronous orbit above the Earth’s equator.  Therefore, most satellite dishes in the United States will face in a southerly direction.  Might be southeast, might be directly south, might be southwest, but knowing that much might be just enough to get you moving in the right general direction.

Now, all of that is quite fun and interesting but is meaningless unless you know the compass direction in which you should be heading.  Therefore, it is important to have at least a general sense of where you are and where you’re going.  For most of us, this isn’t too big of an issue in the grand scheme of things.  In our regular daily lives, while we might be in a hurry to reach our destination, it is rarely ever a true life-or-death situation.

Lost in the woods, though?  That can go from worrisome to downright scary pretty quick.  Evacuating an urban area ahead of a coming danger and getting lost along the way could also be problematic.

Knowing how to find basic compass direction in either of those situations could be quite crucial.

A Compass is a Better Option

Having a compass and knowing how to use is always a preferable option.  I keep a mini-compass on my survival key ring, which, now that I think about it, I have not shared with you. 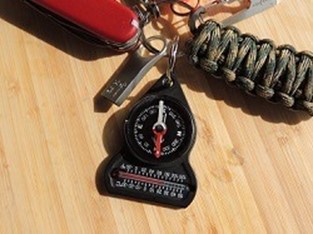 I also have a prismatic sighting compass in my Bug Out Bag but shame on me for not putting it to practical use. 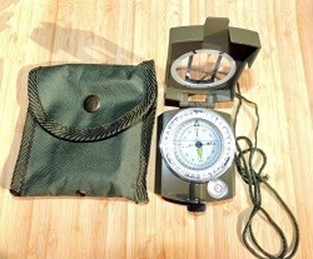 I live on an island offshore the mainland US.  If a disruptive event happened here, I would be able get home without too much difficultly by following the shoreline.  Hopefully there will be roads.  But off-island?  That would not be as easy. Setting aside getting a boat ride home when the ferries are not running, finding my way along an unfamiliar route would be difficult at best and impossible at worst.

Finding my way from the mainland back home without a compass and a map will not be easy.
And now you know where I live!

This summer, while hiking about, I plan to practice my primitive navigation skills plus bone up on the use a compass. Most assuredly, I do want to find my way home, no matter what.

Enjoy your next adventure through common sense and thoughtful preparation!
Gaye

Bargain Bin:  Below you will find links to the items related to today’s article including the items shown on my Survival Key Ring. 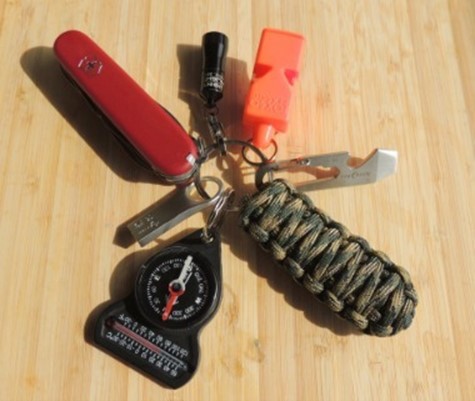 :  I have owned this compass for a long time.  As I mentioned in the article, it is about time I learned how to use it.  This is why Hiking is Important!

:  This pea-less whistle was my choice for my key ring.  It is smaller than theWindstorm (still a favorite) with no “pea” to stick and impede sound. The harder you blow, the louder the sound.

Streamlight Nano Light Keychain LED Flashlight:  This little flashlight is extremely small and light weight yet it will throw off a decent amount of super-bright light. At just .36 ounces and 1.47 inches long, it will take up a minimum of space in your pocket or bag.  It is the #1 bestseller on Amazon in the category Key Chain Flashlights

: This is the Swiss army knife that both Shelly and I carry.  It includes the following: large and small blades, two standard screwdrivers, bottle and can openers, a corkscrew, a wire stripper, scissors, key ring, reamer, and parcel hook. In addition, there is a tweezers and a toothpick that pull out of the end.

: I much prefer these metalized flash drives because the ring will not break.  Been there, done that.  These flash/thumb drives have really come down in price and are great for storing important documents.

: This little tool comes in handy for all sorts of things. You can use it to pry things, screw or unscrew things, and as a measure.  It is well worth the $5 and weighs almost nothing on your key ring.

: This is the compass I carry with me.  It is tossed around in my handbag and has suffered a lot of abuse along the way.  That said, nary a crack or scratch in the casing.

: The paracord key ring I own is no longer available on Amazon but here is a good alternative.  Pricewise, you get 2 for the price I paid for one.

Jim Cobb is a recognized authority on disaster readiness. He has also been a licensed private detective for about 15 years. Previous to that, he spent several years working in loss prevention and security.

Jim’s books include Prepper’s Home Defense, Countdown to Preparedness, and Prepper’s Financial Guide (coming March 2015). He can be found online at http://www.SurvivalWeekly.com/ andhttp://www.DisasterPrepConsultants.com/. You can connect with him on Facebook athttp://www.facebook.com/jimcobbsurvival/.