How to Thrive and Survive in a Red Cross Shelter

During disasters like wildfires and floods, we’ve all seen TV news reports that the Red Cross is opening a shelter at such-and-such High School or other public building. It’s hard not to feel sorry for people who are either temporarily or permanently unable to return to their home, who may have lost precious pictures or other possessions. But have you ever imagined yourself in that place?

The need for an emergency shelter can be anticipated in some cases, such as a forecasted hurricane. In larger wildfires, fire officials can sometimes predict the need for additional evacuations requiring a shelter be opened. But in most cases, a shelter is opened with little or no notice. Similarly, the evacuated residents have a sudden need to leave their homes for an unfamiliar environment and an uncertain future. Fortunately, you can prepare in advance for an unexpected stay in a Red Cross shelter.

What is a Shelter?

A shelter is an improvised group dwelling with an organized support staff, established as the result of a disaster or local emergency. American Red Cross Chapters across the country have cots, blankets, and other supplies standing by in case a shelter needs to be opened in an emergency. They also have volunteers and staff trained as Shelter Managers, Shelter Staff, and supporting services provided by Nurses and Disaster Mental Health counselors.

In most cases, the Red Cross has identified the location, such as a school or community center, has inspected it and has entered into an agreement with whoever runs it far in advance of the need for a shelter. That way they can be sure how many people it can accommodate and that it has adequate restroom facilities and other requirements in advance.

However, not all shelters are operated by the Red Cross. Sometimes a church or local government will open and operate a shelter without the help (or knowledge) of the Red Cross; there’s nothing wrong with “spontaneous” shelters, but they may not be as organized or well-supported as a Red Cross shelter. 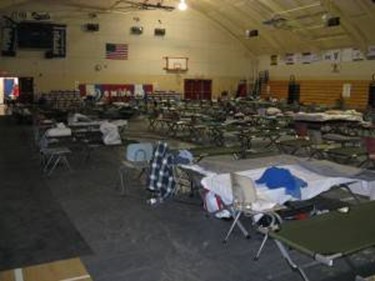 The American Red Cross is a non-profit organization with a unique relationship with the Federal Government and most state and local governments. For the most part, they rely upon the generosity of the American people’s donations to fund their operations.

Here is their description in the National Response Framework, the Federal Government’s emergency plan: The American Red Cross is chartered by Congress to provide relief to survivors of disasters and help people prevent, prepare for, and respond to emergencies. The Red Cross has a legal status of “a federal instrumentality” and maintains a special relationship with the Federal Government.

The “Red Cross Shelter” is the gold standard of what Emergency Managers call “Mass Care.” Mass Care is the provision of group shelter, feeding, and supportive services to disaster victims. Images of school gymnasiums, cots and Red Cross volunteers handing out sandwiches come to mind. The Salvation Army, Southern Baptist Disaster Relief, and many other non-governmental organizations have important parts in the effort. But we all expect the Red Cross to be there when we need them.

So you’ve been evacuated, and need a place to stay, where do you go? Your local officials advertise the locations of shelters on TV and radio news stations, via their mass-notification systems, and on their web pages, Twitter feeds, and Facebook pages. The Red Cross also notes the locations of open shelters on their web page, http://www.redcross.org/find-help. They also have several “apps” for Android and Apple smart phones with great emergency and preparedness information.

What is an “Evacuation Center?”

In some cases, especially if evacuations occur earlier in the day, an Evacuation Center will be opened instead of a full shelter. An Evacuation Center is basically a shelter without the cots. Evacuees can get information updates, snacks, and a place to hang out away from the danger. Some Evacuation Shelters convert to shelters if the need is there, but some don’t.

What about My Animals?

Shelters have to accommodate legitimate service animals, period. Beyond that, the difficulties surrounding sheltering people with their household animals led to the Pets Evacuation and Transportation Standards Act of 2006 (Public Law 109-308), also known as the Pets Act. The Act direct the Federal Emergency Management Agency (FEMA) to ensure that emergency plans “take into account the needs of individuals with household pets and service animals prior to, during, and following a major disaster or emergency.”

In other words, take your pets with you when you evacuate. They are part of your family. Local governments are required to provide them shelter, just as they must provide you shelter. But understand that they may be sheltered away from the Red Cross shelter, especially at first. You may be temporarily separated.

Larger animals like horses will probably be sheltered elsewhere, like at a nearby fair ground, but help should be available. Registering with a local large-animal rescue group in advance will greatly facilitate getting help for them.

All shelter residents are required to register and agree to adhere to the shelter rules. You will be screened for health issues, disabilities, access and functional needs, and medications. You should have shown up with your needed meds. If you don’t have them, alert the staff as soon as you arrive. They may be able to facilitate replacements. If you arrived by car, leave any valuables locked in the car out of sight. Your locked car is more secure than inside the shelter.

Can You Really Prepare for Life in a Shelter?

You absolutely can prepare for a temporary stay in a shelter. In many ways, it’s like preparing for a camping trip. You can have a small “shelter kit” prepared in advance. Examples:
• They will provide a cot, but you can bring your own, which you can choose yourself.
• You can bring bedding for your special cot as well as good pillows.
• Pack a nice towel and small versions of favorite toiletries, brush/comb, toothbrush, etc.
• If you have special dietary needs or follow a certain diet (gluten-free, Kosher, etc), you need to bring your own food. They may not be able to accommodate your needs.
• Pack a small security container (like a pistol safe) that has a way to attach to something solid, to keep your wallet, meds, etc. Theft is sometimes a problem in shelters.
• Throw in a couple of paperback books, cards, puzzles, or toys for the kids to pass the time.
• Invest in extra phone and tablet chargers, an extension cord, and a multi-plug adapter. Outlets are few!
• Pajamas are a must, even if you don’t wear them at home. A robe might be a good idea, too.
• Pack earplugs and an eye-shade if you have difficulty sleeping.
• Anything else in your daily routine you or your family members would miss, such as coffee or tea.

Prepare. Talk it through. Practice. You have more control than you think.