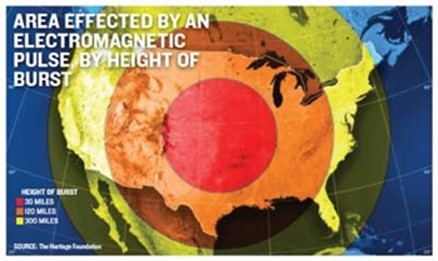 Just a couple weeks ago Peter Vincent Pry, a member of the Congressional EMP Commission and executive director of the Task Force on National and Homeland Security, gave a dire warning to Congress.

He had warned that an electromagnetic pulse (EMP) attack on our power grid and electronic infrastructure could leave most Americans dead and send the U.S. back into another century.

“Natural EMP from a geomagnetic superstorm, like the 1859 Carrington Event or 1921 Railroad Storm, and nuclear EMP attack from terrorists or rogue states, as practiced by North Korea during the nuclear crisis of 2013, are both existential threats that could kill 9-of-10 Americans through starvation, disease and societal collapse,”

Pry, who is a former CIA nuclear weapons analyst, believes that Korea’s recent low-yield nuclear tests in addition to their launch of a low orbit satellite may actually be preparations for a future electromagnetic pulse attack.

What This Means to You

The Heritage Foundation explains what an EMP is capable of in this way:

“Airplanes would fall from the sky; most cars would be inoperable; electrical devices would fail. Water, sewer and electrical networks would fail simultaneously. Systems of banking, energy, transportation, food production and delivery, water, emergency services and even cyberspace would collapse.”

It’s not that the EMP pulse itself is deadly but the effects that it has on electronics can regress our cutting-edge 21st-century technology back a few centuries.

It would in essence “fundamentally change the world”.

What You Should Be Doing

So what’s the important lesson in all of this?

Well, if you haven’t yet, it’s time that you start securing your crucial electronics like communication equipment, medical devices and so on with your own faraday cage.

There are plenty of resources online where you can find out how to build these but be sure to do your homework because there’s a lot of misinformation about the correct method of building a faraday cage.