Here’s where map reading starts to get a little sticky.  It’s important to understand that there are different norths when talking about map reading.

There are really three norths that you will see on a map’s declination diagram (usually.)  Take a look at the declination diagram below.  This chart shows us the three norths.  First is MN (magnetic north) to the left – or west – of the other two in this case.  Second is the line with the star, which is true north, and the last north is GN or Grid North, which is what you would measure off a map.  In this instance grid north and true north are almost perfectly lined up, but imagine GN to the right a little and picture three different lines and it could just as easily be the diagram below. 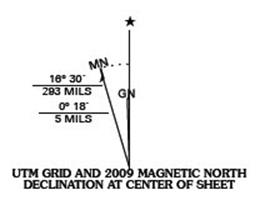 The line with the star or true north won’t be used by us as we learn map reading, so you can disregard it for now.  If you’re interested in a more detailed explanation of true north check it out here.  Below is a quote directly from Wikipedia:

For example:  if I hold my compass and shoot an azimuth toward a mountain top and it reads 215 degrees, I would say, “The mountain top is at 215 degrees magnetic form my current position.”

When I measure an azimuth on my map I would say, “The mountain top is at 215 degrees grid from my position.”

But first let’s look at how to measure an azimuth on a map.

There are different ways to measure an angle, but the one I prefer is by using a special protractor you can buy online.  They’re relatively cheap – between $5 and $10 – and very useful when measuring angles on a map. 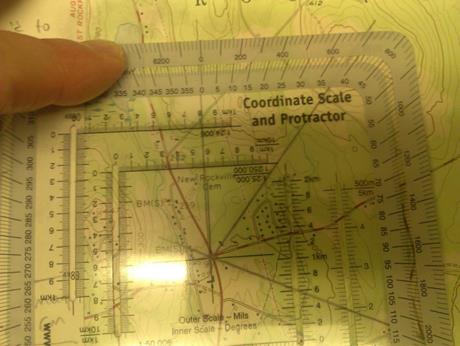 To use a protractor to measure an azimuth make sure it is straight up and down with the map – 0 degrees on the protractor will point straight up (north) on the map.  Like the compass there are two scales to read – the outer scale is in mills, which is 0 to 6400 and the inner is degrees and it is 0 to 360 degrees, which is the one we want.

There are two methods for reading an azimuth on a compass, which I’ll show in a later post.  The important part is reading the angle.

To do that line your compass up on the object you want the azimuth to and then look down through the lens at the red numbers on the dial. 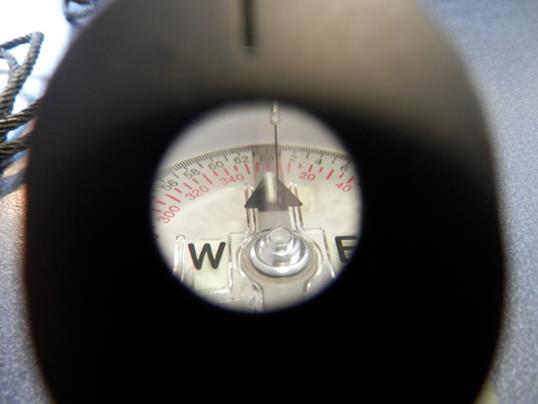 In the example above I’m lined up on 5 degrees magnetic.  The black index line is lined up over the 5.

I’m not going to get into a whole lot of detail on that in this article.  In the next post we’ll talk about using the compass to measure an azimuth and I’ll try to have a video to show you the various ways to do it.

The two important concepts in the lesson are this:

1.  When you read an azimuth from a map it’s referred to as a grid azimuth.

2.  When you read an azimuth from a compass it’s called a magnetic azimuth.

It is critical that you know the difference between the two for later lessons.