A report out of Dallas, TX indicating that a third Ebola infection had been identified in the United States. It was originally believed to be the boyfriend of Nurse Nina Pham, who tested positive for the virus earlier this week.

Pham’s boyfriend is still believed to be in isolation and it is not clear whether he has tested positive for the virus.

A second health care worker in Dallas, however, has tested positive for Ebola this morning, making her the third person in the United States to have been identified.

The infection of a second person who had been caring for Thomas Duncan suggests a total failure in CDC and hospital containment protocols.

A second Dallas hospital worker who provided care for the first Ebola patient diagnosed in the U.S. has tested positive for the disease, pointing to lapses beyond how one individual may have donned and removed personal protective garb.

It’s not clear how the second worker contracted the virus. Authorities declined to say what position she holds at the hospital or the type of care she provided to Thomas Eric Duncan, who was diagnosed with Ebola after coming to the U.S. from Liberia. Duncan died Oct. 8.
…

“What happened there (in Dallas), regardless of the reason, is not acceptable. It shouldn’t have happened,” Anthony Fauci, director of the Institute of Allergy and Infectious Diseases of NIH, said on MSNBC Wednesday.

The worker at Texas Health Presbyterian Hospital was monitoring herself for symptoms, Dallas County Judge Clay Jenkins said. The unidentified woman reported a fever Tuesday. She was in isolation within 90 minutes, Jenkins said.

“We are looking at every element of our personal protection equipment and infection control in the hospital,” said Dr. Daniel Varga, chief clinical officer for Texas Health Resources, which operates Texas Health Presbyterian Hospital Dallas.

Dr. Tom Frieden, head of the CDC, has acknowledged that the government wasn’t aggressive enough in managing Ebola and containing the virus as it spread from an infected patient to a nurse at a Dallas hospital.

“We could’ve sent a more robust hospital infection control team and been more hands-on with the hospital from day one about exactly how this should be managed,” he said Tuesday. (Breitbart)

The previous report is below and discusses the possibility of another potential Ebola case currently in isolation. It was originally believed that Nina Pham’s boyfriend was the third confirmed Ebola case in America.

Various reports now making their way through social networks and alternative media sources claim that Nina Pham’s boyfriend may have been admitted to a Dallas-area hospital. It is not clear whether the individual was showing symptoms of the virus or if he has been quarantined as a precautionary measure. According to NBC DFW, “Texas Health Presbyterian is monitoring the patient based on the Centers for Disease Control and Prevention protocol.”

Ms. Pham is the first person to contract the virus in the United States after being one of several medical personnel to provide care for the late Thomas Duncan, who arrived in America from West Africa two weeks ago.

According to reports Pham’s boyfriend works for Fort Worth-based eye care firm Alcon. A letter from Alcon CEO Jeff George sent to employees on Monday says that one of the company’s associates was admitted to Texas Health Presbyterian. George specifically notes in the letter that the individual who has been admitted was not showing symptoms of the virus, but there are contradicting reports with some suggesting that the individual admitted to the hospital was showing Ebola-like symptoms. 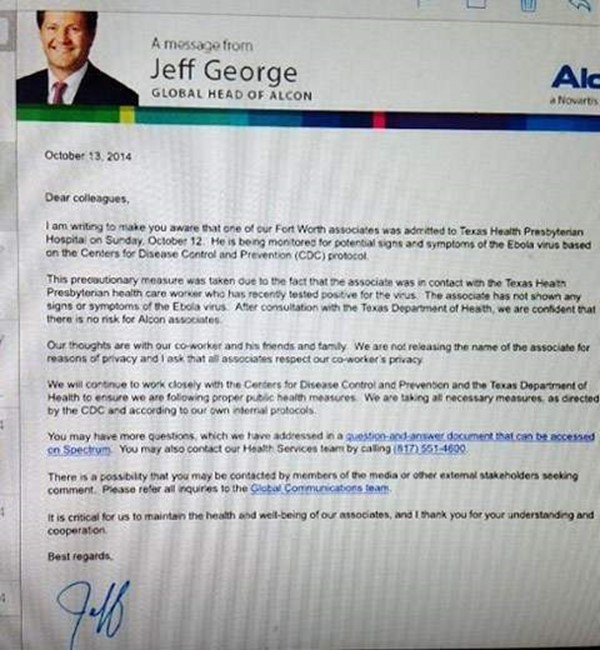 It is believed that Nina Pham’s parents and boyfriend are employees of Alcon.

A follow up report from Got News indicates that two Alcon sources confirm the legitimacy of the letter and according to NBC the company says it is not worried about further infections:

Alcon officials said they are confident that there is no risk for their associates after a consultation with the Texas Department of Health.

The Ebola virus has an incubation period of 2 to 21 days according to the CDC. This means that even though Pham had only been showing symptoms for a short period of time before being admitted to the hospital, it is possible that the individual identified by Alcon could have been exposed to the virus before Pham realized she was getting sick. With a two day incubation period, had her boyfriend been exposed it’s possible that he could have showed a more rapid onset of symptoms than Pham or Duncan.

The Centers for Disease control and Texas Health Presbyterian have yet to confirm if the new patient has tested positive for the virus, but some scattered reports online say that tests have actually confirmed infection. These reports have not been independently verified or confirmed.

If it turns out that this individual has Ebola he would be the first non-medical person in the United States to contract the virus, a development that could further stoke panic across America.

The CDC has maintained that they are prepared for Ebola even though director Thomas Frieden admitted yesterday that they have to rethink the way Ebola control protocols are implemented. It’s an admission that has brought further criticism to the agency, which has a $6.6 billion yearly budget, for their failure to implement effective quarantine and control procedures.

The latest potential case in Dallas highlights fears that the Ebola virus may have spread from Thomas Duncan, who was symptomatic two weeks ago, to the general population. With the high end of the incubation period being 21 days, if Duncan infected others then those cases will start showing up at hospitals within the next week.

Should this be the case, and more people become infected with the virus, it is only a matter of time before it makes its way to other major metropolitan areas. It’s also possible that, because of a lack of sufficient screening procedures and flight restrictions, more infected individuals from West Africa or elsewhere could eventually arrive in the United States.

Other than repeating that they have things under control, the CDC has failed to issue any pandemic preparedness guidelines to the general public. Even hospitals across the country lack a single standard for dealing with the virus.

The lack of information from the CDC and a concerned American public has led to panic buying of critical medical supplies like WHO-recommended respirator masks, protective body suits, goggles, gloves and pandemic kits to prevent the spread of contagious diseases.