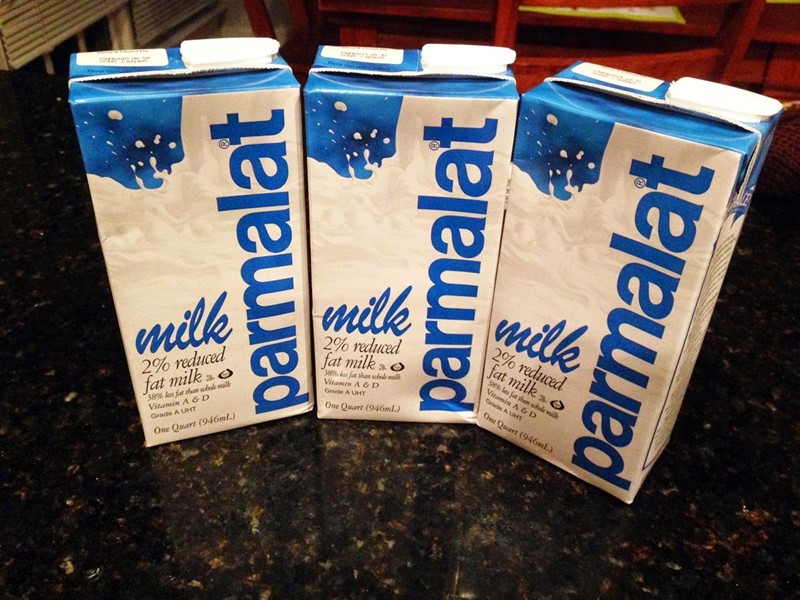 They’ve had UHT pasteurized milk over in Europe for a looong while–like the 70s. In many countries, the majority of milk consumed is UHT milk.

I’ve had some in past during living stints in Switzerland, and then promptly forgot about it upon returning to the U.S., where it hasn’t been readily available for sale until recently. Something about shelf stable milk weirding us Americans out.

Taste-wise, it’s somewhere around skim. Dramatically better than powdered milk. You can’t tell the difference pouring it over a bowl of cereal or using it in a recipe. It’s even good enough to drink on its own.

I’ve found it at local Target and Wal-Mart stores as well as the local Dollar Tree, which means it’s probably in your local grocery/mega-marts, too. Prices are $2/quart average, so more expensive than regular milk, but not highway robbery.

Recommended shelf life is going to range from six months to a year, though as usual, your mileage may vary. We just bought some (September ’14) that has a Best By date of April ’15, so that’s 8 months. Like most shelf life/best by dates, those are probably pretty conservative.

In terms of food storage, a year is a fairly short shelf life, so it’ll need more frequent rotation. Unlike non-fat powdered milk, this isn’t something you can throw in your basement and forget about for the next 20 years.

But, unlike powdered milk, this is one of those “store what you eat” things that is really easy to rotate.

Running low on milk? Crack open one of these to keep the family tided over ’till you can get to the store.

With little ones in the house, you can find yourself in that situation pretty frequently. That’s when this stuff rocks. Since most kids have a Spidey-sense for when we’ve changed up something with their food, but most can’t tell the difference with UHT milk.

Super convenient, super easy. Never again find yourself with a fresh batch of cookies/brownies and no milk.

After some trials and taste tests with the family, this stuff has a thumbs up from me. I’m going to stock up on around a month’s worth of milk for our family, and then rotate out regularly from there.