Walmart Customer Killed By Cops for Playing With a BB-Gun 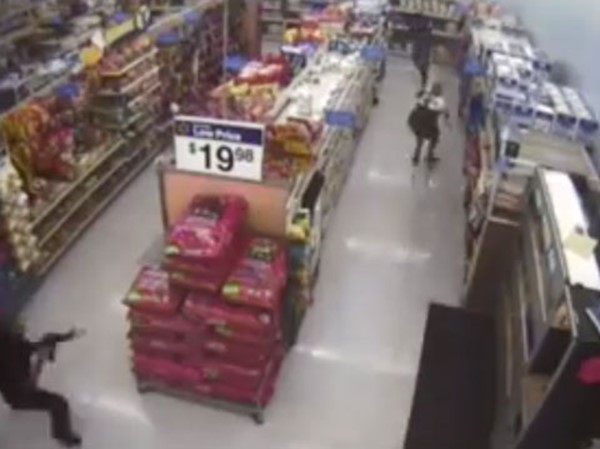 In early August John Crawford III went to Walmart on what was supposed to be a normal shopping trip. While there, Crawford happened across an unpackaged BB gun that he picked up off the shelf in the sporting goods section of the store. He proceeded to walk around the store and make a cell phone call.

A concerned citizen at the Walmart had apparently thought Crawford was holding a real rifle. According to an Infowars report, the man called 9-1-1 and reported that an individual was walking around with a gun in the store.

The witness who phoned police, ex-marine Ronald Ritchie, reportedly told 9-1-1 he saw Crawford “walking around with a gun in the store,” and that he was “loading it right now,” and pointing it at customers and children.

He “was just waving it at children and people. Items…. I couldn’t hear anything that he was saying. I’m thinking that he is either going to rob the place or he’s there to shoot somebody else,” Ritchie said.

Two police officers responded to the call. According to the officers, Crawford failed to comply with orders to drop the weapon when police approached him.

Seconds later he was dead.

But a new surveillance video released just days after a Grand Jury found that the officers had acted appropriately and chose not to level any charges against them shows a slightly different set of events. In the split screen video below, which shows officers approaching Crawford, it appears that Crawford did drop his weapon and subsequently dove for cover. Crawford then gets up and runs around a corner, at which point he is shot at near point blank range.

Watch the raw footage for yourself and decide if police were justified in their actions:

The video shows that Crawford immediately dropped his weapon and dove for cover when he spotted someone coming towards him. As another officer flanked him from the other side, Crawford may have panicked, jumped up and ran for cover down the other aisle. It just so happened that the other officer was coming towards him at the time. Perhaps that officer, who had his weapon drawn, was startled as Crawford came around the corner.

“It was an execution, no doubt about it,” alleged Crawford’s father, John Crawford II. “It was flat-out murder. And when you see the footage, it will illustrate that.”

The video of the incident seems to bolster the family’s claims, as there is absolutely no reaction by Crawford until he is hit by gunfire presumably.

Additionally, preliminary autopsy findings show that Crawford was shot in the back of his left arm and in his left side, which supports the claim that he was never even facing the officers that shot him, as shown in the video. These facts support a narrative that officers never made verbal contact with Crawford, but instead simply gunned him down on sight.

When reviewing the video, Crawford neither points the weapon at anyone, nor does he have any type of body language suggesting that he ever heard any commands given to him to drop the BB gun if they were actually given. It’s much more likely, judging from the surveillance video, that officers simply shot Crawford on sight without giving him the opportunity to drop the toy gun.

There are many problems with this case, but one glaring problem is that open carry is fully legal in this jurisdiction, so the notion of officers approaching and simply shooting someone that is carrying something that resembles a rifle is very troubling for all open carry supporters.

In addition, the man who initially made the call to 9-1-1 to report that Crawford was carrying a weapon around the store and pointing it at people, Ronald Ritchie, has already admitted to lying about the facts regarding his 9-1-1 call.

During the initial call, Ritchie claimed that a black man was “walking around with a gun in the store.” He told the dispatcher, “He’s, like, pointing it at people,” and later told reporters, “He was pointing at people. Children walking by,” according to The Guardian.

But a month later in an interview with The Guardian he had changed his story stating, “At no point did he shoulder the rifle and point it at somebody.”

Additionally, in the initial call, Ritichie told the dispatcher that Crawford appeared to be “trying to load” the gun, which the 9-1-1 dispatcher relayed to officers telling them that they thought the gunman had “just put some bullets inside.”

With all information available, and the video now being released, it seems that officers were jacked up and ready for confrontation and there seems to be little doubt that they simply ran up on Crawford and gunned him down.

Though the Grand Jury chose not to charge the officers, the Justice Department has promised to look into the matter.

Did police act within the law when they shot and killed John Crawford? Or is this another case of overzealous cops making a choice to shoot first and ask questions later? Or, was this just a situation that went awry when both parties – Crawford and the police officers – panicked?

Via: shtfplan, The Daily Sheeple, The Free Thought Project