How To Make A Glowstick Perimeter Alert System

The purpose of this device is to warn you when someone crosses your perimeter. The rat trap, when tripped, breaks the glowstick and causes it to illuminate. So, not only will you hear the trap snap shut, you’ll see where your perimeter was breached.

The glow stick perimeter protector relies on line of sight in order to be an effective option for an early warning sign. This nifty little contraption could provide a cost effective solution for providing an added level of security to a safe haven location. These are fairly easy trip wire signaling devices that will alert you to the location an intruder is approaching from.

The glow stick perimeter protector can be strategically placed around the entire encampment giving all those concerned a little extra breathing room as far as security is concerned.

I started by painting the rat trap OD green because, as everyone knows, painting it this color makes it 40% more awesome. Then I drilled 6 holes through the trap. Be sure to use a “rat trap” and not a mousetrap. 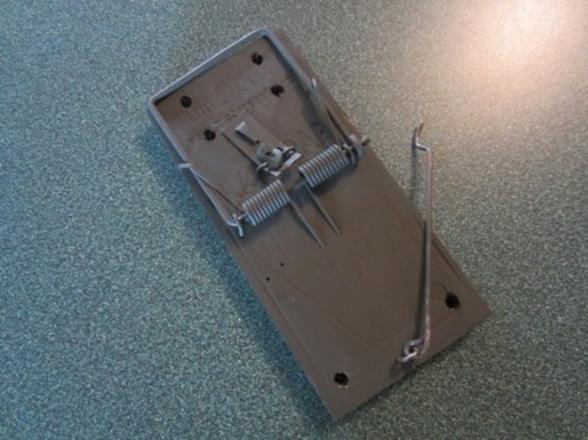 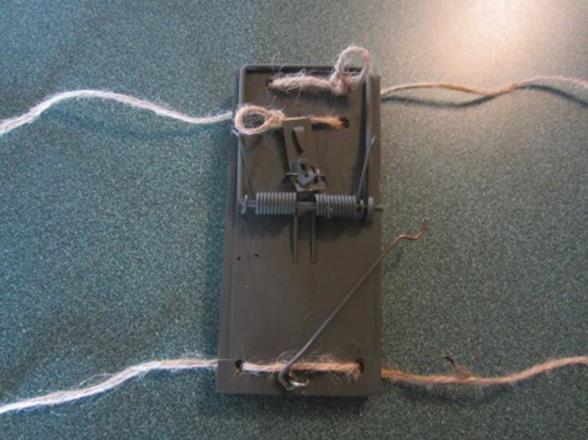 The completed trap should look something like this. Tie your “tripwire” to the rat traps trigger and set it about knee high so that little critters don’t set it off. I used the line that came with the glowstick during testing, but there are certainly other ways that you could rig this up. 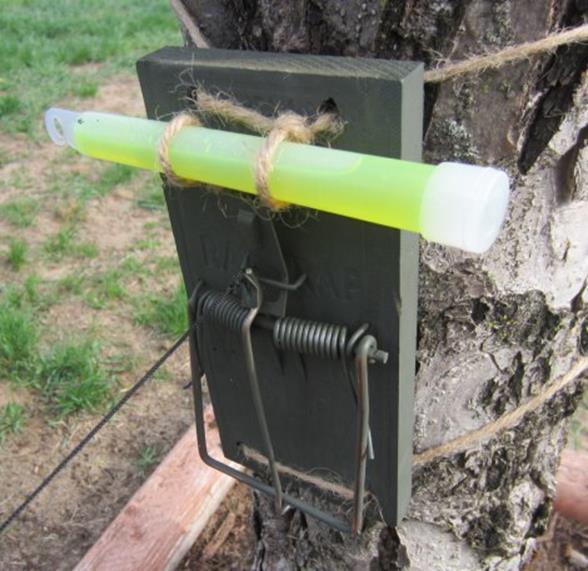 Do not make the mistake of relying on the glow stick perimeter protector as a stand-alone solution. As I mentioned previously, these devices require line of sight in order to be effective. They do not emit enough light to visibly see who or what is approaching, but they do glow enough to identify a direction of intrusion, allowing you to respond to an affected area and investigate.

Here is a extra commnet on this:

What you could also do .. is mount it a bit higher, and put it on tension with springs, so when it snaps and cracks the glow stick, it will also shake and the liquid would receive more movement.. though dont make it too lax that it spins around and the glow stick ends up between the trap and the tree… tight enough but with springs so it jiggles and shakes the liquid enough to give you a faster igniting glow.

Also using a Hi Intensity Stick as they light faster and Brighter.

Layer 1: The Outside Layer

Layer 2: The Inside Layer

This is the most critical layer.

It’s not enough these days to tell those who are home alone to have the doors and windows locked at all times or to not open doors for strangers.  Parents need to thoroughly discuss emergency and safety plans with those living in the home, as well as protocols on how to handle certain dangers.  A person who is prepared for a possible run in with a burglar or home invader is well equipped with knowledge on the home’s security features, knowledge on how to get additional family members to safety, get help, and as a last resort know how to use a weapon. Teaching members of the family what a home invasion is and the dangers associated with it will help them understand that invaders will not be kind, that they are intending to hurt persons who are inside, and will stop at nothing to get what they want.

When an emergency arises, adrenaline is kicks in, and triggers the fight-or-flight response, causing a rush of emotion, anxiety and for some, panic.  Practising emergency plans can help a family know exactly what to do and how to stay calm doing it.  Dangers such as home invasions and burglaries are occurring more frequently, thus causing those who are home alone to be more at risk.  Having layers of security features in and outside of the home can keep those inside the home safer.

While I am not normally a great fan of stuffing my phone full of apps that are entertaining but useless at best, here is one that I came across that can actually prove very useful for those that have the older Civil Defense survey meters that have and audio output that lets you hear the clicks as the Geiger tube is detecting hits. This will work with any meter that gives audible clicks for activity that is being detected by the Geiger tube, the app needs the external input through the microphone on the iPad / iPhone or a patch cable made to utilize direct input.

What’s more important about this app is the accuracy that can be attained with it. The CDV-700 that was used to test this was calibrated by a lab in the late 90’s so I have a fairly high confidence that its meter is reading correctly, all the readings that were taken with the application using the audio from the survey meter matched what it was showing on the analog meter.

The application is called Geiger Bot, and it is available on iTunes for free. Yes, you heard me right, free. Now if this app on an iPhone were to be coupled up with the compact Geiger Counter that is offered by GQ Electronics LLC for $95.00 you have a good handheld radiation detector that will even alert you if the background radiation rises above safe levels.

I will not detail out all of the functionality of the application, the author of it has already done a great job on his web site (http://sites.google.com/site/geigerbot/).

So for those that have an old CDV-700 meter and an iPhone or iPad, here is a way to bring it forward into the digital age for a minimum cost.