Awhile back I decided the pack I carried around was getting too heavy.  I kept adding gear to the pack because there was space in it and pretty soon I was packing stuff in sideways and stuffing it in as tight as I could get it.  The thing is when I went out in the woods with what I had I wasn’t using half of it.  I wrote a post about using a smaller kit here.

So the question is:  does it work?

I’ve had a chance to evaluate it for a month or more now and I’m pleased to report that I like the new configuration much better.  First of all it’s light.  On Christmas day I strapped myself to a sled with my boy riding on it and then put my pack on over the straps.  Then I hauled the whole mess out into the woods to make some noodle soup for me and my son.  Even carrying the pack and pulling the sled it was much easier than carrying my old pack. 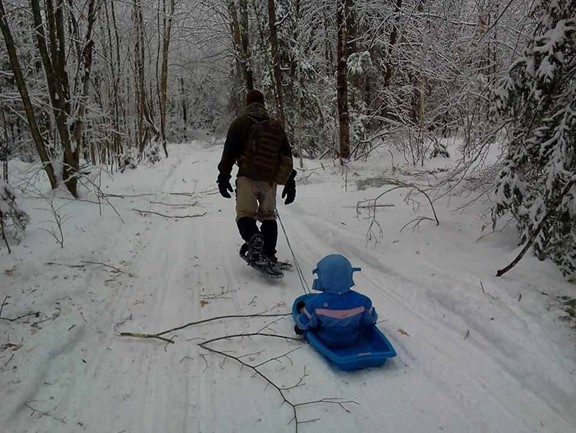 (In the picture I’m pulling my daughter on a snowmobile trail and carrying the pack.  We get the kids out in the woods at every opportunity.  This was right after the ice storm.  A little later I put the pack in the sled behind her and that worked well too.)

There’s also much more room in the pack for extra gear *if* I need to throw something in.  This also makes it much easier to find gear in the dark if needed.

I’ve added a few extra things that aren’t in the original 10 C’s, but I’ve done it with the idea that it has to be extremely important to me in order to earn a spot in the bag.

Here’s a list of what I’ve got in the bag:

In short, this is a much better kit for me in the woods than what I was carrying.  That’s not to say if I was going on a longer camping trip I wouldn’t pack a heavier bag, but for tooling around in the woods for a day I can’t beat it.  It’s got everything I need to survive if I get stuck out there over night and it’s light enough to carry around, even in the deep snow, without killing myself.

Keep in mind this list might look different for you.  The most important tool in your wilderness arsenal is your knowledge and experience in the great out doors.  You might be more comfortable with different items than what I have here, so when choosing gear for your list make sure you take that into account.

Like I said earlier, I added a few items to this list that probably aren’t covered in the 10 C’s like a first aid kit and a plastic cup in addition to my steel cup.  The reason for that is that I like to have a hot drink while I’m eating out of the canteen cup.  This is purely a personal decision based on how I like to do things when I’m out there.  Could I live without the extra cup?  Certainly, but it’s worth it to me to carry that extra item.

The first aid kit was added because I cut myself a couple of times with that new sharp knife.  Totally my fault, but when I say that baby is sharp you can believe me.  After the second time I cut myself and used toilet paper and duct tape to bandage it up I figured I’d add a simple first aid kit to the pack.  It weighs next to nothing yet has enough bandages to stop the bleeding if I ever give myself a serious cut.

In short, the 10 C’s have everything you need to survive and if you add just a few small extras you can be comfortable as well.  When you’re out in the woods even the smallest item can be considered a luxury.

Be sure not to start adding stuff back in thought or pretty soon you’ll be right back where you started.