The Safest Areas in America: An Expanded Western Relocation Zone

This article has been contributed by the Strategic Relocation Blog

I have often been asked to comment on Jim Rawles’ concept of the Redoubt for survival relocation.  Rawles’ criteria of distance from population threats, defend ability, and agricultural suitability focus upon a fairly limited area of the Western US, centered on Idaho, and includes Western Montana and parts of Eastern Washington and Oregon.  In reality, it’s a fine area and certainly matches my core recommendations in Strategic Relocation for security, safety and livability, but it may be too limiting for most people.

However, having consulted with people and designed high security residences for the last 40 years around North America, I realize all too well that most people have financial, distance from family, weather and other personal limitations that simply won’t allow for relocation to an area so far north and remote from their needs as the Redoubt.  Some people, for example, need access to an international airport hub, which doesn’t exist in the Redoubt.  Others need a drier, sunnier climate for health reasons or even more solar potential.  Others simply need something closer to the metro area that have to remain in due to job or family reasons.

The map in Figure 1 below represents what I would recommend as an Expanded Secure Relocation Area. I don’t use the term “redoubt” because of its military defense implications. Even though I believe in defensibility at the retreat level I don’t like to infer that some broader military resistance strategy is possible for most people. For individual families I prefer less confrontational strategies of blending in, or getting out of the way, or concealment as the best form of defense for most people. 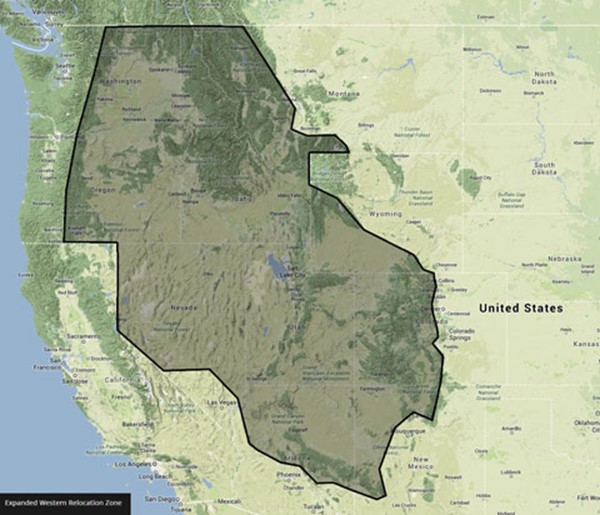 The area I have outlined is what is generally referred to as the Intermountain West and includes the Great Basin—that high desert plain between the Cascade/Sierra Mountains of Washington, Oregon and California over to the middle of the Rocky Mountains of Colorado and New Mexico.  These two mountain ranges converge as they get further north and merge in Canada.  They provide a pretty formidable barrier for those coming from the West Coast or the Midwest.  In addition, the Great Basin has within its boundaries hundreds of miles of trackless desert and mountain areas that provide isolation by distance and hardship for anyone entering the area without vehicles, fuel and water.

That doesn’t mean everything within these bounders is equally safe, secure, or livable.  Obviously, border areas near California or Denver are not as safe as those in the central areas more distant from population threats. A person must be careful to select specific locations that meet the survival criteria others and I have outlined in Strategic Relocation.  The climate, for example, in this expanded area allows for a lot more use of solar in Nevada, Utah, western Colorado, and Northern Arizona.  And even though much drier than the Northwest, snowfall does fill mountain reservoirs which provides a reliable flow of irrigation water if you pick the right area.  Sure, the high mountain deserts can’t provide for large masses of people, but we aren’t trying to save the whole world here, just those who have the forethought to relocate in advance of the coming world crises, be they war, economic or disease.

This expanded security area centers around Salt Lake City, which is the only big metro area in the region and which has the full range of commercial facilities including an international airport (hub for Delta Airlines).  Most of the other smaller cities in the West have feeder flights into SLC. The Salt Lake Valley itself is not recommended for security, even though it is safer than most other large metro areas, unless you have an additional retreat in or past the many secure areas which surround SLC.  Unlike Denver, where the high mountains are miles away from the unsafe city area, in Utah the Wasatch Front of the Rocky mountains come right down to the city’s edge and provide not only quick access to mountain retreat areas but a barrier to social unrest from the cities.

This isn’t to say that you have to be anywhere near SLC or the center of the expanded secure area in order to find safety. I still highly recommend the Northern Idaho and Western Montana areas of Rawles’ Redoubt.  But for people who have to remain in California or Southern Arizona, it’s just too far for a retreat.  That is why I have included the forested higher elevations of Northern Arizona and Southern Utah for those needing to get out of Southern California or Phoenix and reach their retreat in one day.

I have excluded much of Eastern Wyoming, such as the mountains and valleys around Sheridan Wyoming simply because of the danger inherent in being downwind of the Yellowstone caldera.  It’s just too potent of a volcanic threat to areas east of Yellowstone Park to recommend for retreats or full time residences.  I’ve only included about half the Colorado Rockies in Colorado to avoid being too close to Denver and Colorado Springs, which are major nuclear targets and contain high density urban threats.

I’ve placed the borders of the secure zone clear into the Cascade and Sierra Mountains of the three most Western states even though they may be too close to the urban areas of Washington, Oregon and California—but that depends on how close you are to the major mountain passes that channel people through the mountains. You can find good retreat areas in those border areas if you carefully select areas not visible from or easily accessible from the highway passes.  This exemplifies why I emphasize more specific location criteria in Strategic Relocation rather than everyone trying to find the mythical “safe area,” which supposedly allows them to buy a home in a suburban area and feel safe.  It’s never that simple.  Safety is only relative—even in this general secure zone—so you must take care in selecting the homesite, as well as take precautions to secure your home, as I detail in my larger work, The Secure Home.

In summary, this expanded area gives you a lot more options both for full time residences near major commercial centers, and for retreats and survival farms in rural areas—in what we survival experts consider the safest general area in the United States.

This is also a good area for ultimate retreats for those who will develop their preparedness strategy first in other areas of the US to the East—which are all covered in great detail in Strategic Relocation.  What I mean is that if you need to stay in the East or Midwest, you should always think about “where do I go from here” if my initial retreat strategic fails or is overwhelmed with refugees?  In general, if social unrest occurs in the US it will flow from the overly populated East and Northeast to the Midwest. There will also be flows outward from LA, SF, and Seattle to the more rural areas but will generally stay within the area confined between the Coast and the mountains.  Few will dare flee into the hostile desserts of California and Nevada.

If you have the financial resources to develop a staged strategic relocation (suburban safe home, farm retreat and short-term mountain retreat) that’s always better than putting “all your eggs in one basket.”  But, in the final analysis, don’t despair if the task seems daunting or beyond your financial reach.  While you should stretch and save to achieve your preparedness goals, we all have limits and can only do so much.  We do what we can and then depend on God’s help to make up the difference.  Be sure and seek inspiration in any relocation choice you make.  These major decisions in life should not be made by human criteria alone.

Joel Skousen is a political scientist, by training, specializing in the philosophy of law and Constitutional theory, and is also a designer of high security residences and retreats. He is the author of Strategic Relocation – North American Guide to Safe Places and has also developed a fact-filled companion DVD to help those looking to relocate out of major cities.

Visit the Strategic Relocation Blog for more information and resources on the best places to live in America and how to find the perfect survival property.

Via: shtfplan and Joel M. Skousen of Strategic Relocation Blog