The U.S. could suffer a coast-to-coast blackout if saboteurs knocked out just nine of the country’s 55,000 electric-transmission substations on a scorching summer day, according to a previously unreported federal analysis.

The study by the Federal Energy Regulatory Commission concluded that coordinated attacks in each of the nation’s three separate electric systems could cause the entire power network to collapse, people familiar with the research said. 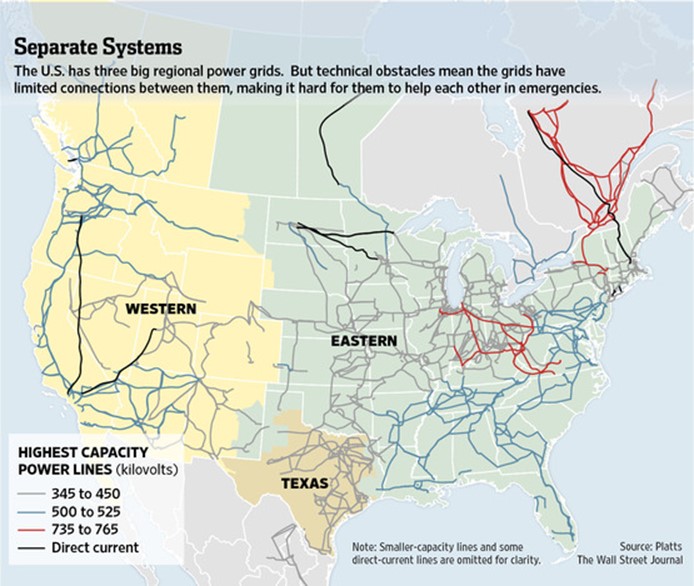 The U.S. could suffer a coast-to-coast blackout if saboteurs knocked out nine of the country’s electric-transmission substations on a summer day, according to a previously unreported federal analysis. National War College Professor Dr. Richard Andres discusses.

A small number of the country’s substations play an outsize role in keeping power flowing across large regions. The FERC analysis indicates that knocking out nine of those key substations could plunge the country into darkness for weeks, if not months.

With over 160,000 miles of transmission lines, the U.S. power grid is designed to handle natural and man-made disasters, as well as fluctuations in demand. How does the system work? WSJ’s Jason Bellini has #TheShortAnswer.

“This would be an event of unprecedented proportions,” said Ross Baldick, a professor of electrical engineering at the University of Texas at Austin.

FERC last year used software to model the electric system’s performance under the stress of losing important substations. The substations use large power transformers to boost the voltage of electricity so it can move long distances and then to reduce the voltage to a usable level as the electricity nears homes and businesses.

The agency’s so-called power-flow analysis found that different sets of nine big substations produced similar results. The Wall Street Journal isn’t publishing the list of 30 critical substations studied by FERC. The commission declined to discuss the analysis or to release its contents.

Some federal officials said the conclusions might overstate the grid’s vulnerability.

Electric systems are designed to be resilient and it would be difficult for attackers to disable many locations, said David Ortiz, an Energy Department deputy assistant secretary who was briefed on the FERC study. The agency’s findings nevertheless had value “as a way of starting a conversation on physical security,” he said.

The study’s results have been known for months by people at federal agencies, Congress and the White House, who were briefed by then-FERC Chairman Jon Wellinghoff and others at the commission. As reported by the Journal last month, Mr. Wellinghoff was concerned about a shooting attack on a California substation last April, which he said could be a dress rehearsal for additional assaults.

“There are probably less than 100 critical high voltage substations on our grid in this country that need to be protected from a physical attack,” he said by email this week. “It is neither a monumental task, nor is it an inordinate sum of money that would be required to do so.” Mr. Wellinghoff left FERC in November and is a partner at law firm Stoel Rives LLP in San Francisco.

FERC has given the industry until early June to propose new standards for the security of critical facilities, such as substations.

Executives at several big utilities declined to discuss the risks to substations but said they are increasing spending on security. Virginia-based Dominion Resources Inc., D +0.56%for example, said it planned to spend $300 million to $500 million within seven years to harden its facilities.

A memo prepared at FERC in late June for Mr. Wellinghoff before he briefed senior officials made several urgent points. “Destroy nine interconnection substations and a transformer manufacturer and the entire United States grid would be down for at least 18 months, probably longer,” said the memo, which was reviewed by the Journal. That lengthy outage is possible for several reasons, including that only a handful of U.S. factories build transformers.

The California attack “demonstrates that it does not require sophistication to do significant damage to the U.S. grid,” according to the memo, which was written by Leonard Tao, FERC’s director of external affairs. Mr. Tao said his function was to help Mr. Wellinghoff simplify his report on the analysis.

The memo reflected a belief by some people at the agency that an attack-related blackout could be extraordinarily long, in part because big transformers and other equipment are hard to replace. Also, each of the three regional electric systems—the West, the East and Texas—have limited interconnections, making it hard for them to help each other in an emergency.

Some experts said other simulations that are widely used in the electricity industry produced similar results as the FERC analysis.

“This study used a relatively simplified model, but other models come to the same conclusion,” said A.P. “Sakis” Meliopoulos, professor of electrical and computer engineering at the Georgia Institute of Technology in Atlanta. He estimated it would take “a slightly larger number” of substation attacks to cause a U.S.-wide blackout.

In its modeling, FERC studied what would happen if various combinations of substations were crippled in the three electrical systems that serve the contiguous U.S. The agency concluded the systems could go dark if as few as nine locations were knocked out: four in the East, three in the West and two in Texas, people with knowledge of the analysis said.

The actual number of locations that would have to be knocked out to spawn a massive blackout would vary depending on available generation resources, energy demand, which is highest on hot days, and other factors, experts said. Because it is difficult to build new transmission routes, existing big substations are becoming more crucial to handling electricity.

In last April’s attack at PG&E Corp.’s PCG +0.70% Metcalf substation, gunmen shot 17 large transformers over 19 minutes before fleeing in advance of police. The state grid operator was able to avoid any blackouts.

The Metcalf substation sits near a freeway outside San Jose, Calif. Some experts worry that substations farther from cities could face longer attacks because of their distance from police. Many sites aren’t staffed and are protected by little more than chain-link fences and cameras.

While the prospect of a nationwide blackout because of sabotage might seem remote, small equipment failures have led to widespread power outages. In September 2011, for example, a failed transmission line in Arizona set off a chain reaction that created an outage affecting millions of people in the state and Southern California.

“The power grid, built over many decades in a benign environment, now faces a range of threats it was never designed to survive,” said Paul Stockton, a former assistant secretary of defense and president of risk-assessment firm Cloud Peak Analytics. “That’s got to be the focus going forward.”

So think it can’t happen:

In just the last couple of weeks, in Darwin (capital of the Northern Territories, Australia) something tripped an emergency switch and all power was shut down for a large area of the state. Not only did the power go out but also water and the cell phone towers. It took 24 hours to slowly go through all the substations to manually switch them all back on, taking over 24 hours to do so. Over 86,000 households without power. Now that is a lot of people when no one preps although it is still the wet season there (I think).

Now that was an accident, but what if someone decided to do something nasty like booby trap the substations. I was going to say it doesn’t bear thinking about, but of course we do need to think about the possibility.