US schools weigh bulletproof uniforms: ‘It’s no different than a seatbelt in a car’

Here is a older article I found interesting and wanted to share.

Some parents and teachers are taking matters into their own hands. 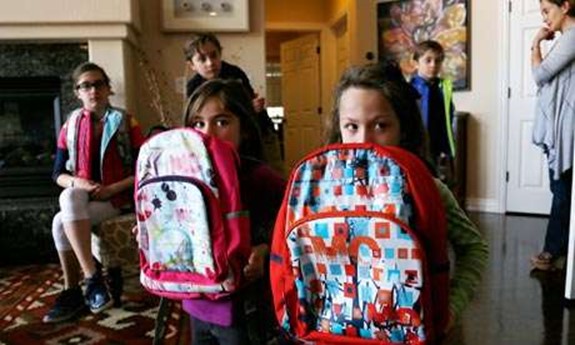 Children demonstrate how to use bulletproof backpacks as shields in Aurora, Colorado.

The pink bulletproof rucksack that 5-year-old Jaliyah wears to school every day reaches almost down to her knees and weighs 3lbs even when empty, but for her Colorado father, the size and solidity are part of the attraction.

“If you put it on her back, it almost covers her whole body,” explains Demitric Boykin. “It was a very hard conversation to have but she knows that it’s something that will keep her safe.”

Lined with ballistic material that can stop a 9mm bullet travelling at 400 metres per second, the backpack is only one of a clutch of new products making their way into US schools in the wake of Newtown school massacre. As gun control legislation grinds to halt in Washington, a growing number of parents and teachers are taking matters into their own hands.

The Denver company that supplied Jaliyah’s rucksack, Elite Sterling Security, has sold over 300 in the last two months and received inquiries from some 2,000 families across the US. It is also in discussion with more than a dozen schools in Colorado about equipping them with ballistic safety vests, a scaled-down version of military uniforms designed to hang in classroom cupboards for children to wear in an emergency.

Tensions are understandably high in this part of America. “I live in Aurora and the shooting here really hit home; it was a huge thing,” says Boykin. The new mood, however, can be felt far from the scenes of recent gun violence.

Barry Tull, headteacher of Worcester Preparatory School in rural Maryland, has 80 ballistic shields deployed in his classrooms disguised as whiteboards and clipboards. Some teachers use them to assign homework, others lean them up against the wall, but most of Worcester’s middle and high-school children know what they are for.

“Our teachers were concerned to begin with about whether they were expected to be first responders, but at least they feel they have something now as opposed to cowering in the corner with their kids,” says Tull. “The former secret service trainers we had in showed us how they can deploy them; how to hold them in front of their body defensively or use them offensively where the teacher charges at someone with the shield as cover.”

A spring-loaded bolt was used to show school employees what it would feel like to block a bullet with one of the shields.

The US manufacturer that supplied this equipment, Hardwire, has sold similar white boards to schools in North Dakota, Pennsylvania and California. Elite Sterling Security also sells sheets disguised as rainbow-covered posters to hang on the back of classroom doors to prevent someone trying to shoot their way in.

Scott Staska, superintendent of schools in Rocori, Minnesota, scene of another shooting in 2003, says Hardwire’s ballistic shields are just one part of the precautions his schools are now taking: “We have door locks, safety cameras, and emergency procedures all designed to assist with an emergency situation and we see the marker boards as one additional tool to help in the process.”

Another option to look at is: Bulletproof Backpack Panel