Using Honey as a Topical Antibiotic: The Honey Bandage

We have talked about the many uses of honey before, so I wanted to share with you this story of its use recently from  http://foodstorageandsurvival.com.

Honey is one of the more versatile foods you can store.  You know it tastes good on toast and in your tea, but did you know honey also has healing properties?  We recently got to experiment with honey as a topical antibiotic when our adventurous little dog, Huck, decided to go get his foot caught in a leg hold trap.  And then stay there for 8 hours before we found him.  In foot deep snow on December 25th. 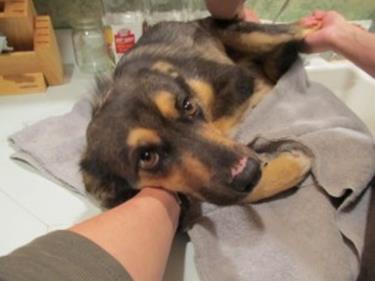 One sad dog getting doctored up

It was not a good situation when we found him–the foot under the trap was hard and frozen.  We brought him home and warmed it up and it swelled up about three times the size of his other foot.  After three days of this swelling we decided he may have an infection so off to the vet we went.  “Give him this antibiotic and an anti-inflamatory and we’ll see how it’s doing in a couple of weeks”.

Well the swelling went down and the skin on the top part of the foot under where the trap had cut off circulation started to fall off.  This was really gross.  There was still some skin and hair on the top of the foot at this point but we didn’t know what was going on, so on January 15th, feeling like spending even more money right after Christmas, we went back to the vet thinking Huck might lose his leg or something.  This time the vet could see better what was going on.  That patch of skin left on top of the foot was dead and would eventually fall off, but the bottom of the foot was alive and well.  So to aid in healing and cleanliness, she recommended cutting the top patch of skin off and starting a honey bandage.  A what?  A honey bandage.  Yes honey, like the stuff you have on your toast.  Honey has antibacterial properties as well as enzymes that help the skin heal without leaving a lot of scarring, so it’s perfect for use as a wound dressing.

So that’s what we did.  Here’s how the honey bandage works.  You have an open wound–large surface area wounds are perfect.  Cover the wound with raw honey.  Processed honey has had a lot of the good honey enzymes killed when it went through the heating process, so raw honey is best.  Then bandage over the honey–we used a non-stick pad held in place by a gauze wrap and then covered that with vet wrap and tape to add a little waterproofing and stability.  This is a dog who was not going to quit running around just because some people thought he was wounded.  He also had to wear the cone of shame because he really liked to tear the bandaging off.  Poor dog.  Here’s how it looked all wrapped up: 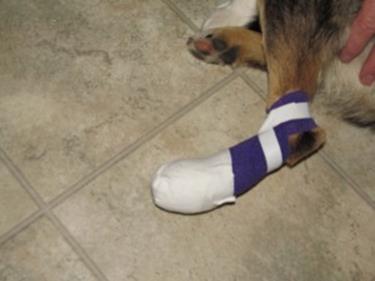 We changed the honey bandage every day for the first month.  During the first three weeks he was also on an oral antibiotic.  After four weeks we cut back changing the bandage to every 2 to 2 1/2 days.

It only took a week and a half for the uppermost parts of exposed bone to be covered with muscle again and nice pink skin to start growing back around the edges of the wound.

Here’s the progress.  A few of the photos are a little graphic, especially in the beginning, so I made it so you have to click to see the pictures just in case some of my more sensitive readers don’t want to see the injury:

Day 1 After Surgery
Lots of exposed skin, exposed bone to the left and bottom

Day 16
Regrowing skin already, plus all the bone to the left is covered

Day 46  Check out all the hair growing back at the edges!

Day 61  Almost all done.  The last bit of bone is finally grown over.

Day 72 it was all healed over but I didn’t get a picture before he went outside, ran around and tore a spot of that nice new skin open.  So back in the bandage he went for a couple of days. 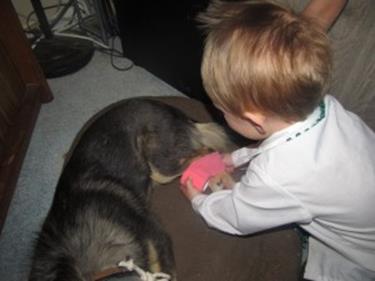 Be sure to employ quality help wrapping the wound from the toddler!

There was obviously some nerve damage from the trap as he can no longer move that foot, and it is pretty ugly (I’m holding out hope for more hair to grow back), but it sure could have been worse.  He still has a foot on the end of his leg and he’s still running around.  Thanks, honey bandage.