UPDATE [15:35 CDT] Following an early afternoon standoff with Bundy supporters and militia, the Bureau of Land Management is withdrawing federal agents from the area. There are reports of heavy traffic on I-15 as a result of a federal caravan of exiting agencies.

Bundy ranch cowboys and hands are standing by for the BLM to open the coral gates and release cattle rounded up during this week’s raid.

Communications to the area seem to have been restored. No shots have been fired.

The resolution at this time seems to be a peaceful one, despite earlier threats from federal agents that they would shoot into the crowd if they did not disperse.

You can watch a live feed (available at 15:40 CDT) with Infowars’ David Knight at Ustream.

Read the original report below: Victory for Citizen Militia: FedGov Pulls Out of Nevada: “Serious Concern About the Safety of Employees” 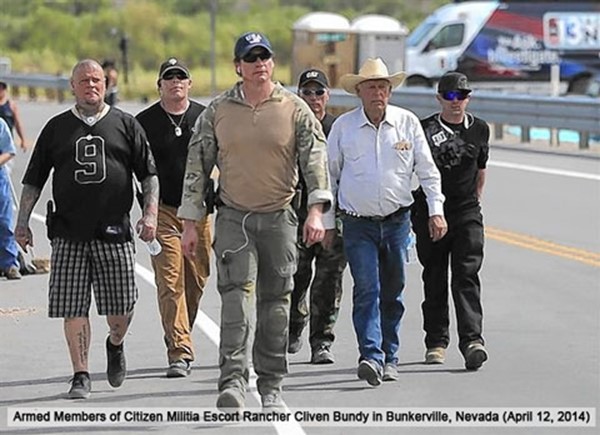 A couple hundred years ago some domestic terrorists got together and penned a Bill of Rights for a fledgling nation. Within their founding document they included a provision designed specifically to protect its newly formed experiment from tyrannical rule by way of arming its inhabitants so as to provide a backstop for those who would attempt to supplant their natural rights to life, liberty and the pursuit of happiness.

This morning we have a prime example of why the founding fathers found these steps necessary and how powerful their decree really is to ensuring the freedom of Americans.

A well-regulated militia being necessary to the security of a free state, the right of the people to keep and bear arms shall not be infringed.

Over the last two days thousands of supporters have made their way to Bunkerville, Nevada where hundreds Federal government agents had begun rounding up privately owned cattle from public lands and cordoning off protesters into remote desert First Amendment Areas.

What made this particular “protest” different from previous peaceful assemblies like Occupy Wall Street is that many of those who arrived in Bunkerville were members of citizen militias from around the country – and they were heavily armed.

In short, this time around our overreaching Federal government was out manned and outgunned.

As reported by Infowars, the Bureau of Land Management and other Federal agencies have made the decision to pull their militarized assets out of the area.

A day after Infowars blew the lid on Sen. Harry Reid’s link to the BLM’s land grab of the Bundy Ranch, the Sheriff of Clark County, Nevada, Douglas Gillespie, announced to tremendous applause Saturday that the Bureau of Land Management would cease their efforts targeting cattle rancher Cliven Bundy.

In an emotional response, Bundy told the Sheriff he had one hour to disarm the federal agency and to bring the arms to the platform where speeches were made this morning, and to take down their barricades.

According to a statement issued by the BLM, their primary reason for ceasing operations is because of safety concerns.

“Based on information about conditions on the ground, and in consultation with law enforcement, we have made a decision to conclude the cattle gather because of our serious concern about the safety of employees and members of the public.”

“We ask that all parties in the area remain peaceful and law-abiding as the Bureau of Land Management and National Park Service work to end the operation in an orderly manner.

The “information on the ground” is that there are thousands of men and women standing by and that they were prepared to take action had it become necessary.

Though the government still maintains a court order for the rounding up of cattle, they have for the time being made the decision to walk away. This is not to say they won’t return in the future, but for today, the people are victorious.

Consider how these events would have played out had those who arrived to support the Bundy family not been armed; if they had simply showed up with protest signs and cell phones.

The end result would likely have looked more like this: 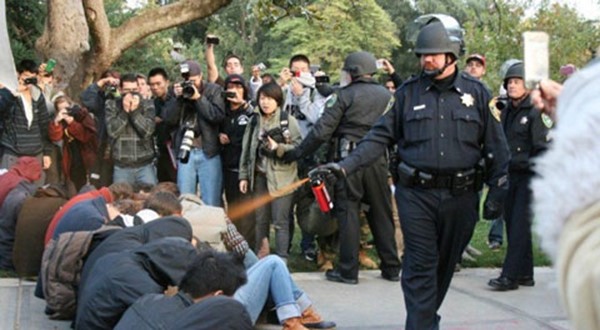 Rather than being tied up and pepper sprayed, the brave Americans who ventured to Bunkerville held their ground, 2nd Amendment in hand, and the government determined it was no longer in their best interests to pursue the matter.

A new day has dawned in America. One where the people see that real change can happen.

Activism really does work. This incident has proven that the Patriots and the militias are worthy adversaries.  We have proven the power of social media and alternative news in the fight against tyranny. (Daily Sheeple)

The events of Bunkerville, Nevada show that the government, which so badly wants to control every aspect of our lives, can be defeated and sent packing.

My only comment is now, watch out for some late night raid, as they also never forget.