On five occasions this week AlertsUSA subscribers were notified via SMS messages to their mobile devices regarding safety and security matters. Beginning Monday, AlertsUSA subscribers were notified of a new propaganda poster published by the Islamic State’s media arm suggesting an attack is forthcoming on the Vatican near Christmas. The image shows a masked jihadi driving at high speed towards St Peter’s Square and the Basilica at the Vatican, where the Pope usually holds a large Catholic mass. An assault rifle, rucksack and explosives are clearly visible on the seat next to the driver. Words on the poster read “Christmas Blood, So Wait…” 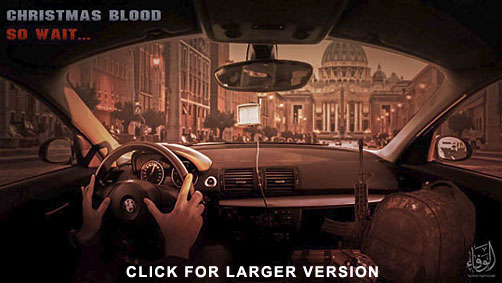 Readers are reminded that Islamic State, in it’s 2014 declaration of war against the West, stated,

“We will conquer your Rome, break your crosses, and enslave your women.”

The Islamic State, and Islam in general, hold a particular blood lust for Catholics and Rome as more than nine centuries ago, the First Crusade (1096–1099) was called by Pope Urban II, who was alarmed that Muslims were persecuting Christians on their pilgrimages to the Holy Land. The Second Crusade (1147–1149) was called by Pope Eugene III. In all, eight major Crusade expeditions occurred between 1096 and 1291. In addition, Muslims view Rome, and more specifically, the Vatican, as home base for Christianity, with Christians themselves viewed as enemies of God.

This is not the first time that Islamist groups have threatened or carried out attacks on churches and around Christmas. Examples include last December’s truck attack on a holiday market in Berlin which killed 12 and injured 56, last year’s Istanbul New Year’s Eve nightclub attack, last year’s attack on a Catholic church near Normandy, France within which a priest’s throat was slashed at the altar, and the failed al-Qaeda bombing attempt on Northwest Airlines Flight 253 from Amsterdam as the aircraft was preparing to land in Detroit on Christmas Day of 2009.

In related news, on Thursday AlertsUSA subscribers were notified of a new Europe-wide travel alert issued by the State Department warning of the heightened risk of terrorist attacks, and in particular, during the holiday season.

Individuals planning travel abroad (to Europe or elsewhere) during the end-of-year holidays are STRONGLY encouraged to take some time to investigate the terror threat levels in your destination countries, to have the address and contact information for the nearest U.S. Embassy, and to be registered with the State Department’s Smart Traveler Enrollment Program.Developing a mindset of security awareness and preparedness is essential given the times.

If new threats develop, AlertsUSA is one of your best options for staying informed.

11/13 – ROK military on heightened alert for poss DPRK provocations after N. Korean soldier shot while defecting through the Joint Security Area (JSA) in the DMZ.

The U.S. Dept. of State is the authoritative federal source for information on the security situation at travel destinations worldwide. With tensions rapidly increasing in most regions, readers planning on international travel, even to such common destinations as Canada, Mexico or the Caribbean Islands, are strongly encouraged to do a little research on the security situation well prior to departure.