The saber rattling on the Korean Peninsula has reached dangerous levels, with North Korea test firing yet another ballistic missile despite repeated condemnation and threats from the international community. According to the U.S. Pacific Command, the missile launch took place at 10:33 AM Hawaii time from the Pukchange Airfield north of Pyongyang. Despite wildly varying mainstream media reports to the contrary, U.S. Pacific Command notes that the missile did not leave North Korean territory before crashing and did not reach the Sea of Japan.

“Past efforts have failed to halt North Korea’s unlawful weapons programs and nuclear and ballistic missile tests. With each provocation, North Korea jeopardizes stability in Northeast Asia and poses a growing threat to our allies and the U.S. homeland.?

In an Reuters interview on Thursday, President Trump said that tensions on the Korean Peninsula were reaching a boiling point;

?There’s a chance we could end up having a major, major conflict with North Korea. Absolutely?

“The threat of a North Korean nuclear attack on Seoul or Tokyo is real.”

The senior U.S. Navy officer overseeing military operations in the Pacific region told lawmakers Thursday that the North Korean crisis is the worst he’s seen — testifying that it’s only a matter of time before Kim Jong Un has the capability of launching a nuclear warhead toward the United States.

Also this week, the office of the Prime Minister of Japan waned it’s citizens to prepare, saying that a missile attack from N. Korea could come with less than ten minuets warning.

Earlier in the week, the US military began installation of the Terminal High Altitude Area Defense (THAAD) system in response to the North Korean missile threat. Known by the acronym THAAD, this anti-ballistic missile system is designed to shoot down short, medium, and intermediate range ballistic missiles in their terminal phase using a hit-to-kill approach. The missile carries no warhead, but relies on the kinetic energy of impact to destroy the incoming target. China has repeatedly expressed anger at the deployment given the strength of THAAD’s X Band active electronically scanned array radar that can peer deep into Chinese territory.

AlertsUSA urges subscribers to be in a mindset of possible warfare. One of the most important preps you can have is information. To this end, AlertsUSA urges readers to download a copy of this classic reference for your own digital bookshelf to help reinforce the safety of yourself and family. 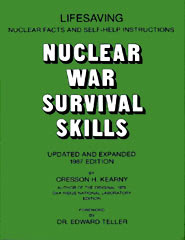 Nuclear War Survival Skills by Cresson Kearny is a civil defense manual. It contains information gleaned from research performed at Oak Ridge National Laboratory during the Cold War, as well as from Kearny’s extensive jungle living and international travels.

Nuclear War Survival Skills aims to provide a general audience with advice on how to survive conditions likely to be encountered in the event of a nuclear catastrophe, as well as encouraging optimism in the face of such a catastrophe by asserting the survivability of a nuclear war.

AlertsUSA continues to monitor the overall domestic and international threat environment and will immediately notify service subscribers via SMS messages of new alerts, warnings and advisories or any developments which signal a change the overall threat picture for American citizens as events warrant.

* Homeland Security Threat Info Direct to Your
Mobile Device
* Get Away Early, Give Your Family Extra Safety.
* In Wide Use By Gov, 1st Responders, Travelers.
* 24/7/365 Monitoring. No Hype. Just the Bad Stuff.
* Issued Hours and Days before the MSM.
* On your Cell Phone, Tablet or Email.
* We Give The Clear Truth, Unlike the MSM.
* Over a Decade in Operation!

UK police shoot 1, arrest 6 others in counterterror raids
US adds Saudi ISIS leader to terror list
Germany bans face veils for civil servants amid security measures
Russia steps up anti-U.S. military propaganda
Edward Snowden can stay as long as he likes, says Russia
Theresa May turns combative ahead of Brexit negotiations
This Little-Known US Ally Could Be Pivotal on Russia, China Policy
Macedonia Shaken by Violence in Parliament
Keep Your Eyes on the Protests in Russia’s Provinces
Does Putin Still Favor Sidekick Medvedev?
Russ ian mafia groups reportedly operate in Europe on behalf of the Kremlin

Christians are under attack, and not even the Pope can convince them to stay
U.S. forces to monitor situation along Syria-Turkey border
Chemical weapons allegedly used 45 times in Syria
At U.N., U.S. calls for pressure on Russia to try to end Syria war
U.S.-backed forces push against IS in slowed Raqqa campaign
Foreign Islamic State fighters are ‘fighting to the death’ in Mosul
Houthi rebels use another unmanned boat bomb against the Saudis
Abbas turns screw on Hamas by cutting Gaza’s electricity
Iran candidates square off in first TV debate

Asia weighs risk and reward in Trump ‘bromance’ with China’s Xi
Russia says use of force on North Korea would be ‘completely unacceptable’
China cautions against use of force on North Korea
South Korea paying for THAAD ‘impossible’: presidential frontrunner’s aide
North Korea seeks Southeast Asian support over ‘grave situation’ with US
US vows sanctions and will activate Thaad system ‘within days’
North Koreans in Japan sense growing hostility
Accelerated THAAD deployment dividing South Korean Presidential candidates
‘We are a target’: South Korean village wakes up on frontline with North

In order to help ground readers in the truth on Islam and enable you to crush liberal “Religion of Peace” arguments, AlertsUSA has compiled two free reports filled with passages from Islamic holy books covering some of the most controversial (and often denied) aspects of Islamic teachings, traditions and dogma. Now you can see them for yourself !

DEADLY VERSES
164 Passages about Jihad from the Koran