“What People Have Got to Know is That They’re On Their Own, Literally.” 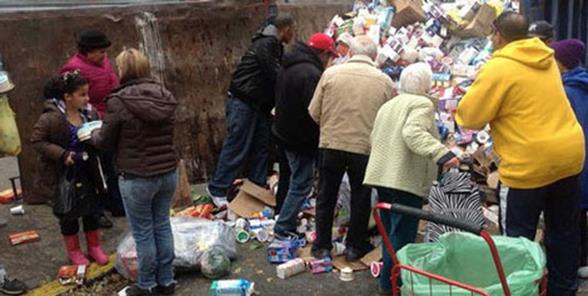 (Pictured: Help is not coming. Sandy victims rummage through trash for food in Bayonne, NJ)

Over coming weeks millions of Americans will be tuning in to NatGeo’s new American Blackout film about surviving in a post-power grid collapse environment that lacks electricity, fresh water and the normal flow of commerce.

For most it will be nothing more than standard evening entertainment, but what if such an event turns out to be a future American reality?

Such a scenario may seem improbable, but just in the last several years we’ve seen it play out time and again all over the world, albeit in situations limited in time and scope. Hurricane Katrina and over 50,000 people stranded at the New Orleans Super Dome with no water, Hurricane Sandy and starving individuals rumaging through garbage cans to find a morsel of food, and various other natural and man-made disasters are an eye-opening testament to what happens when the improbable becomes reality.

Just a few weeks ago we saw what the panicked hive mentality can lead to when thousands of people stormed Walmart grocery stores following a breakdown in the Electronic Benefit Transfer system for food assistance.

We’ve become so dependent on others – namely our governments – to assist us when crisis strikes, that this “learned helplessness” in our society has left people in major cities totally unprepared to cope with disasters.

“We can’t have a truck or a car at your door when you ring triple-0 in a disaster situation.”

Experts say people should be prepared to look after themselves for at least three days after any major disaster.

But Mr Winter says most people have no plans in place.

“If we turn off power and water, how long will you be able to survive?” he said.

“When we put to people, ‘Can you survive for 72 hours without external help?’, the reaction is their jaw drops.”

Such a disaster could mean a loss of refrigeration, no tap water or air-conditioning, as well as transport failures and traffic chaos.

Mr Winter says cities are particularly vulnerable to these failures.

“We are more vulnerable in our big cities because we’ve got transport, we live in high rises, evacuations – talk to people about Katrina, in New Orleans, getting people out of the city,” he said.

In 2009, a heatwave in Melbourne killed more people than the Black Saturday bushfires.

Triple-0 emergency lines were overwhelmed, hospitals overflowed and the ambulance service was near breaking point after 12 days of temperatures above 28 degrees Celsius.

“When flooding was occurring, people went to the grocery store and bought frozen goods,” he said.

“Frozen goods are the first things that you have to throw out. You want people to understand that they’ve actually got to live without the capacity to flick on the light switch or the electric stove or the gas stove.

“People misunderstand what is likely to occur when they are affected by the disasters.”

Mr McGowan warns that the Government’s emphasis on cash handouts after disasters is part of the problem.

“Some of the more recent concentrations on hardship payments and those things have actually started to increase the learned helplessness that many feel during these issues,” he said.

Just 14 per cent of compensations payouts after the Brisbane floods was spent fortifying homes against similar disaster in the future.

Given the number of natural and man-made disasters that strike areas of the globe on a yearly basis, there’s a strong likelihood that one day it may happen to you, too.

Hopefully the disaster will be limited, but even in those cases the government is often overwhelmed. If you think about the possibility of a larger scale emergency, for example a cyber-attack that cripples our power grid as former DHS Secretary Napolitano suggested will happen in the future, there is simply no possible way for first responders to assist everyone who will need help.

Consider that FEMA has stockpiled at least 140 million emergency food rations in their regional emergency response centers. If a large earth quake, Tsunami or rogue terrorist attack struck a population of 1 million people, those supplies would likely be gone within a month – and that’s a best case scenario because FEMA would have to tap regional distribution centers to acquire supplies from all over the country.

It took them 3 days to get water to the Super Dome, if that gives you any ideas of how disorganized emergency response will be.

Given that the United States has over 50 metropolitan areas with populations exceeding 1 million people, you can see how the situation would quickly become untenable if disaster struck just a single major city or region. If it were to go national, striking multiple cities simultaneously, we’d have complete and total pandemonium within a few days.

The only plausible solution, and one that FEMA and DHS fail to support in any significant manner, is personal preparedness. Every household in this country should be urged to develop a personal preparedness plan by stockpiling food rations, potable water, survival tools, and even precious metals like silver bars to help them cope for at least a few weeks should our power grid go down and traditional commerce exchange mechanisms become inoperable. Those who fail to do so will have to deal with the horrific consequences.

Americans have been given a false sense of security through the learned helplessness of government assistance programs and the belief that the billions of dollars being invested into emergency planning is somehow going to provide the necessary supplies they’ll need if crisis strikes.

It’s a recipe for disaster.

We’re not immune from a massive destabilizing event. In fact, we’re likely more vulnerable now than ever before.