Folding knives are often the blades of choice when it comes to every day carry (EDC). Let’s face it, they are far easier to toss into a purse or slip into a pocket than their fixed blade counterparts. But, there are a few things to consider when choosing a folding knife. Remember, as with any other piece of gear, you may end up staking your life on this item, so it pays to be a bit finicky and not just buy something based on price (or appearance) alone.

First and foremost, the blade should be made of high quality steel, preferably something with a high carbon content. This allows for a harder blade that holds an edge longer, without being nearly impossible to sharpen.

As for length, this is sort of a judgment call. Personally, I like a folding blade of around four inches or so. This is large enough for most common tasks, including self-defense, without being cumbersome.

Folding blades generally come either plain or partially serrated. I prefer a plain edge as these are far easier to sharpen in the field. Serrated blades require more specialized tools to keep sharp. Keep in mind, you are far more likely to cut yourself with a dull blade than a sharp one. With a dull knife, you end up having to exert more pressure to make a cut, leading to slips.

Next, you need to consider the handle. It should have some texture to it, providing a solid grip if it gets wet. It should be comfortable in your hand, without any sharp edges that will dig into your palm or fingers as you use the knife. 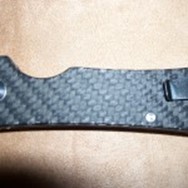 I highly recommend a “lockback” folding knife. This is a knife where the blade locks into place when opened. This locking feature makes for a safer knife, one that isn’t going to close up accidentally while you’re using it.

There are two basic types of locking mechanism. The older style has the lock release along the back of the handle. The other, illustrated here, is called a “liner lock.” You push the metal strip to the side to release the blade for closing. Both locks work well, with the liner lock being much more prevalent today. 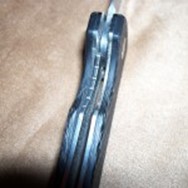 Another nice feature is a thumb stud, which gives you the ability to swing the blade open with one hand. While it is possible to open a folding knife lacking this feature with one hand, you end up doing something of a juggling act to accomplish it.

The stud, shown here, is simply pushed upward with your thumb, opening the knife. This is a great option as you may be in a situation where one hand is either injured or occupied and you’ll want to be able to open the knife with just the other hand. 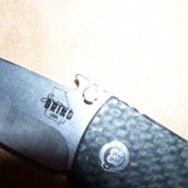 Many folding knives today are sold with clips attached to the handle. This allows for a very secure carry in your pocket. Clips can be large or small. The one shown here is very small, yet holds the knife extremely well.

It pays to shop around and compare prices but a knife is not something you should just buy on the cheap. It is a tool and like any tool, you get what you pay for. Among the brand names I recommend for folding knives are Swiss Army, Southern Grind, and Buck. (Southern Grind and Buck are both made in the USA.) I’ve used their products for years without complaint or failure.