Use Plants To Charge Your phone – E-Kaia

So many do not have electricity readily available to them like we do here in the United States. Rather than bringing the energy to those areas, this device could simply allow them to harvest the energy that is available right beneath their feet all the time.

Three engineers in Chile have invented a smartphone charger that is able to harness energy from plants in order to charge a phone, removing the need for an electrical power supply. 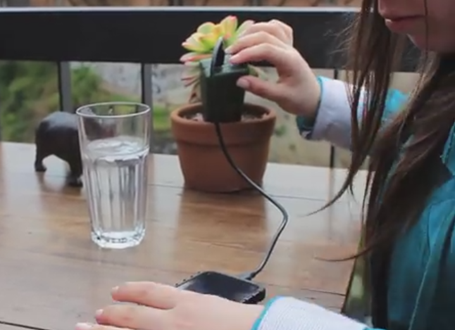 E-Kaia is the brainchild of Evelyn Aravena, Camila Rupcich and Carolina Guerrero, three engineering students who came up with the idea for an electricity-free smartphone charger when they were in university at the Duoc UC in Valparaíso and the Andrés Bello National University in 2009.

In the Netherlands, there is a solution called Plant-e that involves harnessing electricity from living plants, but many plants are required to create the energy needed. Instead, E-Kaia only needs one healthy plant.

A biocircuit is buried in a plant pot with a plant, with outputs leading out of the soil, and 5 volts and 600 milliamps can be harvested and converted into electrical energy without causing any damage to the plant. This amount of power can charge a smartphone in one and a half hours, according to the creators.

The portable ergonomic charging device prototype is still patent-pending, and the creators say that it is not just limited to charging phones– the technology can harvest enough electricity to charge LED lamps, fans, speakers and any type of low-power product that recharges its batteries using a USB port.