Yesterday, due to the crash of two Boeing 737 MAX 8 jets within the last 6 months (with both incidents showing similar characteristics), 34 countries and nearly 30 airlines have suspended operation of the fuel-efficient long-haul aircraft in the last two days. At the time of that warning, U.S. and Canadian aviation authorities were still allowing the aircraft to operate in N. America.

A short time ago, Canadian Transport Minister Marc Garneau issued a statement indicating a safety notice was forthcoming to ban Max 8 & Max 9 aircraft flying into, out of, or across Canada.

Garneau says today’s action is based on satellite tracking data his officials just saw that suggested ‘some similarities’ between what happened Sunday in Ethiopia, killing 157 people, and the October Lion Air crash that took 189 lives in Indonesia. They compared vertical fluctuations and found a ‘similar profile.’ This is not conclusive, he warns, but it is something that points to a similar crash cause.

According to the FAA, there are ~350 MAX series aircraft in operation worldwide across 59 operators, all of which account for ~8500 flights weekly.

American Airlines, United Airlines and Southwest Airlines use the jet in domestic and international flight operations.
AlertsUSA subscribers who are traveling should be in touch with their airlines to determine aircraft type on their flights, as well as to assess possible impact should the aircraft be grounded in N. America.

There will, for sure, be domestic and international flight interruptions.

Sites such as FlightStats.com or SeatGuru.com, can help you determine the type of aircraft you are booked on.

Two Boeing 737 MAX 8 jets have crashed within the last 6 months, with the most recent Ethiopian Airlines Flight 302 which crashed on Sunday, claiming 157 lives.

34 countries and nearly 30 airlines have suspended operation of the fuel-efficient long-haul aircraft in the last two days. U.S. and Canadian aviation authorities are still allowing the aircraft to operate in N. America until more information is available from the FAA.
According to the FAA, there are 350 MAX series aircraft in operation worldwide across 59 operators, all of which account for ~8500 flights weekly.

American Airlines, United Airlines and Southwest Airlines use the jet in domestic and international flight operations.

State Dept announces withdrawal of all remaining personnel from US Embassy Venezuela due to deteriorating situation in country. AlertsUSA monitoring.

This late announcement was made by SecState Pompeo a short time ago. 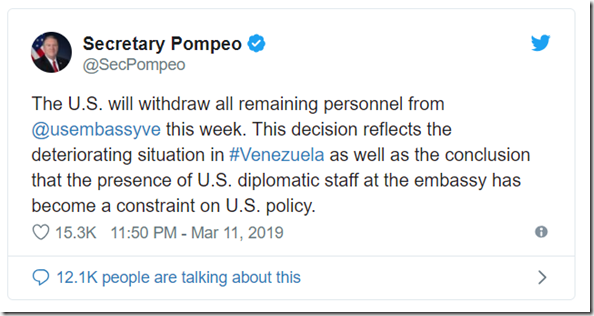 US to withdraw all remaining diplomatic personnel from Venezuela

U.S. To Pull Diplomats Out Of Embassy In Venezuela

The country has been beset by a major power outage in recent days, and drivers wait in line for hours at the few gas stations that are still operational.

Some neighborhoods have no functioning water pumps, the majority of the country’s Internet network remained offline.

For his part, Maduro said the outage was an “electric coup” carried out by “criminal minds” in the U.S., CNN reported. “The imperialist government of the United States ordered this attack,” he said.

Venezuelan breaking off relations with the US. American diplomatic personnel have 72 hours to leave.

Stockpiling of Food Banned in Venezuela

Indian AF jet down in conflict with Pakistan

AlertsUSA is monitoring events in S. Asia. The Indian Air Force has carried out strikes in Pakistan territory. Tensions are high between the two nuclear powers.

Pakistan Foreign Minister Qureshi warns that India has committed aggression by violating the LoC & country is prepared and has the right to respond to attack.

India and Pakistan, both modern nuclear powers, have gone to war in 1947, 1965, 1971 and 1999, along with numerous military operations other than war (MOOTW), skirmishes and standoffs. Control of Kashmir has been the principle cause of all major conflicts between the two countries, with the exception of the Indo-Pakistani War of 1971.
A short time ago, the Indian Air Force crossed the Line of Control (LoC) by several miles within Pakistani-administered Kashmir and dropped ordnance. The action comes following a suicide bombing attack on an Indian security convoy in Pulwama, in Indian-administered Kashmir. If reports are accurate, this will be the first time since the 1971 that the Indian Air Force has crossed the LoC.

This is a dangerous situation. Many defense experts speculate that the next war between India and Pakistan will be with a nuclear backdrop.

AlertsUSA is monitoring the situation and will provide additional alerts as events warrant.

Venezuelan breaking off relations with the US. American diplomatic personnel have 72 hours to leave.

Venezuelan president Nicolas Maduro says he is breaking off relations with the US. American diplomatic personnel have 72 hours to leave the country.

Speaking to supporters outside the Miraflores presidential palace in Caracas, socialist leader Maduro said he would give U.S. diplomatic personnel 72 hours to leave Venezuela, which is suffering from a hyperinflationary economic collapse.

Earlier Wednesday, the Trump administration ratcheted up pressure on Maduro on Wednesday, announcing U.S. recognition of Guaido as interim president and signaling potential new sanctions against its vital oil sector.

With street protests against Maduro underway across Venezuela, Trump said the United States recognized Guaido, head of the opposition-controlled Congress, as the country’s leader and called socialist Maduro’s government “illegitimate.”

“I will continue to use the full weight of United States economic and diplomatic power to press for the restoration of Venezuelan democracy,” Trump said in a statement, encouraging other governments in the Western Hemisphere to also recognize Guaido.

The administration had been waiting to issue its announcement after Guaido had been sworn in as the country’s temporary president on Wednesday, people familiar with the matter told Reuters.

Venezuelan opposition sympathizers had been urging Guaido to assume the presidency since Maduro was inaugurated to a second term on Jan. 10 following a widely boycotted election last year that the United States and many other foreign governments described as a fraudulent.

Guaido, a newcomer on the national scene who was elected to head Congress on Jan. 5, had said earlier he was willing to replace Maduro if he had the support of the military, with the aim of then calling for free elections.

U.S. officials in recent days had stated openly that Maduro no longer had a legitimate claim on power.

This story is developing.

Venezuela has been the example of what can happen to a country and the actions governments can take when things get bad.

Check out these other posts for more info:

Venezuelans regret gun ban, ‘a declaration of war against an unarmed population’

2018 August – Venezuela slashes five zeros from its old currency, renaming it the Sovereign Bolivar and tying it to a state-backed cryptocurrency in a bid to tackle rampant hyperinflation.

The UN warns of a migration “crisis”, estimating that economic woes and food and medical shortages have caused more than two million Venezuelans to leave their country since 2014. Most are settling in nearby Peru, Ecuador, Colombia and Brazil, leading to tensions in the region.

2016 September – Hundreds of thousands of people take part in a protest in Caracas calling for the removal of President Maduro, accusing him of responsibility for the economic crisis.

Stockpiling of Food Banned in Venezuela

2014 February-March – Protests over poor security in the western states of Tachira and Merida spread to Caracas, where they win the backing of opposition parties and turn into anti-government rallies. The government accuses the opposition of seeking to launch a coup and breaks up the protests. At least 28 people die in the violence.

2013 December – The ruling Socialist Party and allies win local elections by a margin of 10% in a poll widely seen as a test of the government’s handling of the continuing economic crisis.